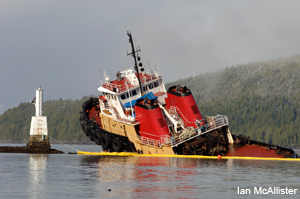 "Vessel incident" broadly refers to a vessel in distress. Vessel incidents can lead to marine vessel casualties such as a situation when a tanker loses engine power, causing it to drift and ground or rupture its hull or fuel tank1.

Unfortunately, many vessel incidents result in the loss of oil from ships. Based on historical data and the proposed amount of tanker traffic associated with the proposed Northern Gateway project, we should expect an oil spill equal to or greater than 1,000 barrels approximately every seven years, and a major oil spill of over 10,000 barrels approximately every 16 years3.

Data Source: The locations of vessel incidents between January 1999 and April 2013 were obtained from the Transportation Safety Board of Canada. Incidents from all vessel types are displayed. Freshwater incidents and ‘person falling overboard’ events were excluded from the final dataset. Incidents happen coast wide but only those within the map study area on the North and Central Coast of British Columbia are displayed here.