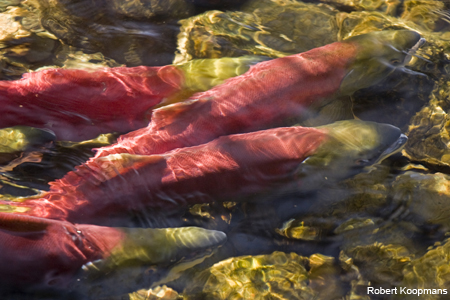 Salmon are the foundation of B.C.’s coast. They provide critical protein to wildlife and nutrients to coastal ecosystems. Salmon have supported First Nations’ fisheries and cultural traditions for thousands of years. Today wild salmon are one of B.C.’s largest commercial fisheries. Ask any true west coaster what the single most important species west of the Rockies is and they’ll tell you: salmon.

The Great Bear Rainforest (the area surrounding Northern Gateway’s proposed tanker routes), is home to over 2,500 salmon runs. Five species of salmon spawn there: chinook, chum, coho, pink and sockeye. Many of these creeks and rivers are still intact, and their salmon stocks still support the people and wildlife of the coast. One oil spill into these waters could change all that1.

The Exxon Valdez spill resulted in the oiling of more than one hundred salmon-spawning streams2. Even low levels of oil can be toxic to salmon in their early life stages3. Nearly all salmon leaving Prince William Sound after that spill were exposed to oil. Perhaps worse, the spill damaged intertidal habitats where most spawning and rearing occurs2,4. In the year of the spill, many salmon eggs died as a result of contamination. Young salmon in oiled creeks were also found to have higher instances of cellular and genetic abnormalities. Wild salmon fry were further injured by consuming oiled prey4.

Our map shows rivers and streams that support spawning salmon. The fish icons are coloured according to the number of species known to spawn there. The darker the colour the more species of salmon are dependent on that river or stream.

Data Source: This point layer identifies the mouths of streams used by anadromous species, including chinook, chum, coho, pink and sockeye salmon, cutthroat trout, as well as steelhead and Dolly Varden trout. This dataset was originally received from the Province of British Columbia. The salmon icons are coloured and sized based on the number of species that have been observed in the stream with smaller, lighter pink coloured icons for the sites where a lower number of species was observed and the larger, darker red coloured icons for the sites where a higher number of species was observed. The observed species are listed in the balloon information. Salmon streams are abundant coast wide but only those within the map study area on the North and Central Coast of British Columbia are displayed here.