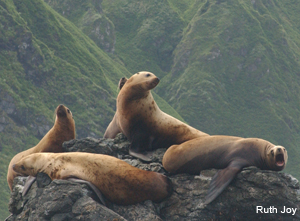 These hefty fellows are the largest of all sea lions1. As carnivores, they rely on their strong swimming and diving skills (and strong jaws!) to catch a variety of fish and mollusks. During mating season each year, females return to their home rookery and adults gather in dense colonies. The resounding growls of the large group ward off potential predators1.

Steller sea lions are protected in Canada as a species of “special concern”, even though their numbers are fairly strong along the B.C. coast. Sea lions are particularly sensitive to disturbance when on land at their haul out locations, and Canadian government biologists expressed concern that the drastic decline in the endangered Alaskan sea lion population (80 percent decline since the 1970s), could spread to the B.C. population. Reduced availability of prey seems to be the most likely cause for the Alaskan decline, but the theory remains controversial2.

Potential oil spills are a known threat to the B.C. Steller sea lion population1,2 as they cause the animals to move away from their rookeries and haul outs. Populations tend to decrease after relocation1.