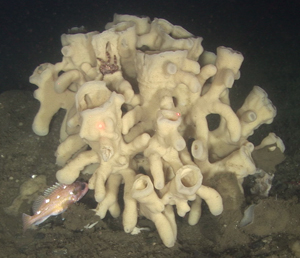 Glass sponge reefs (also known as Hexactinellid sponge reefs) are some of the rarest and most ancient forms on Earth. They first appeared during the Triassic period and were thought to be extinct until they were found off the B.C. coast in the late 1980s. These ancient reefs were so unexpected, and are so old, that some researchers refer to them as “living dinosaurs”. The largest and best-known reefs are in Hecate Strait and Queen Charlotte Sound. Some of these reefs reach heights of 19 meters and spread several kilometres wide, despite growing only a few centimetres per year. Reefs are formed by individual glass sponges growing on existing skeletons of dead sponges1.

Since they have only recently been discovered, scientists know relatively little about Hexactinellids, such as how they reproduce or recover from disturbance2. From the fossil record, we do know that sponges are very sensitive organisms, requiring long term, stable environmental conditions2. We also know that sponge reefs are sensitive to smothering by stirred up sediment1.

The oil that would be shipped from Enbridge’s marine terminal is known as diluted bitumen – a thick, heavy crude oil “watered down” with condensate (a lighter hydrocarbon) to improve its flow for piping. In the event of a tanker spill, the condensate would evaporate and the bitumen would likely sink, given its density3. Enbridge makes no definitive statements in their project application about the effect or movement of diluted bitumen in seawater3. If bitumen does in fact sink it could smother sponge reefs and other life on the seafloor.

Data Source: The extents of the known hexactinellid sponge reefs are displayed. The boundaries of a few sites were simplified to facilitate display in Google Earth but the area covered by each sponge reef was not altered. The original data were received from Natural Resources Canada. Additional sponge reefs can be found in B.C. but only those within the map study area on the North and Central Coast of British Columbia are displayed here.