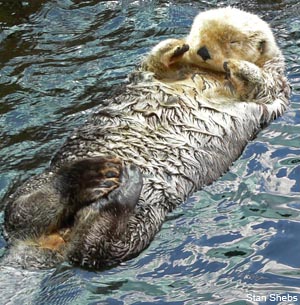 In the 18th and 19th century, sea otters – prized for their dense coats – supported a lucrative fur trade. They were hunted to near extinction and were considered locally extinct on the B.C. coast. In 1911, when an International Treaty was signed between Britain (representing Canada), Japan and Russia, there were only 2,000 otters remaining in the world. The last sea otter was taken from Vancouver Island in 19291.

Between 1969 and 1972, 89 sea otters from Alaska were reintroduced to the west coast of Vancouver Island. By 1998 the population had grown to 2,500 and was on the upswing (current population counts are unknown)1.

The largest known threat to sea otter recovery is oil spills. As little as one teaspoon of oil is enough to destroy the insulating and water repellent properties of sea otter fur, potentially causing death from hypothermia. Sea otters will also unintentionally eat the oil by grooming and cleaning themselves, and by eating contaminated shellfish, thereby damaging their internal organs. Because sea otters return to forage at the same kelp beds (which can hold oil for a substantial length of time) and stay in large groups or ‘rafts’, a large portion of a population can be wiped out from even a single, small oil spill1.

Approximately 2,800 sea otters – nearly half of the population – in the Prince William Sound area were killed following the Exxon Valdez oil spill. The population has still not recovered to pre-spill levels2.

Data Source:
The displayed sea otter range is a generalization of known range occupied by sea otters observed during spring and summer population surveys up to 2008. The seaward extent of this range is the 50 metre depth contour which is considered a reasonable cut-off for most foraging sea otters, although sea otters can dive deeper for prey. The data were received from Fisheries and Oceans Canada (DFO) and updated by the B.C. Marine Conservation Analysis project to limit the data to areas shallower than 50 metres3.