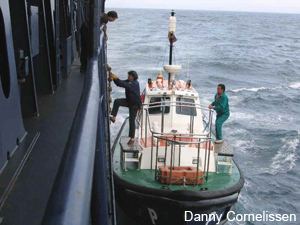 All of the tankers sailing to or departing the Kitimat Terminal will be required to have a Marine Pilot onboard as defined by Canadian Law. A Marine Pilot is a licensed, professional mariner who advises the ship captain on the safest route into port. In B.C. this service is provided by the BC Coast Pilots, who ensure vessels entering B.C.’s waters are navigated without damage to the ship, its crew, the public or the marine environment1.

Enbridge does not consider the Pine Island or Cape Beale stations suitable for servicing the Kitimat Terminal because of their distance from the designated tanker routes2. The Pine Island station, however, is currently used by vessels calling at the Port of Kitimat, and Enbridge has not eliminated Pine Island as a potential station. The proposed routes for tankers approaching Kitimat from the south would be adjusted if pilots were picked up at Pine Island. The tankers would pass in close proximity to the northern tip of Vancouver Island then continue north along a route much closer to the mainland coast.

While the BC Coast Pilots have an excellent safety record, it is the tankers themselves that can run into trouble. A marine vessel casualty analysis conducted in the Los Angeles/Long Beach Port area revealed that an average of one in 100 com¬mercial vessels sustained some type of steering or propulsion failure during the inbound or outbound transit3. For Northern Gateway, this would be at least two failures per year.

Data Source: The point layer identifies the general locations of pilot boarding stations based on a map available from the British Columbia Coastal Marine Pilots4. The compulsory pilotage areas were digitized by Living Oceans Society from the February 2011 Pacific Pilotage Regulations.