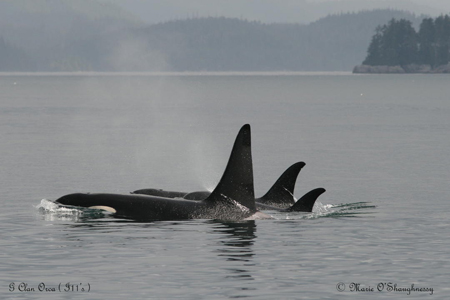 Orcas (killer whales) are majestic, intelligent and social animals. There are three types of orca that live in B.C. waters: resident, transient and offshore killer whales. These types do not associate with one another as their ranges, diets and social dynamics differ. Resident killer whales travel in pods or family groups and feed primarily on chinook and chum salmon. Transient and offshore orcas prey on marine mammals such as seals and sea lions.

Scientists have identified the critical habitat on the map as areas of seasonal importance to threatened1 Northern Resident killer whales. These areas are associated with feeding, resting, socializing, mating and beach rubbing during the summer and fall and our federal government is obliged to protect this habitat2. Little is known about diet and distribution of residents during the winter and spring months.

Ongoing population studies on killer whales following the Exxon Valdez spill in Prince William Sound, Alaska have shown that orcas (and other cetaceans) do not necessarily avoid oil slicks or sheens and may not even be able to detect oil in water. Research shows that population declines in both resident and transient killer whale populations in the year following the Exxon Valdez spill were a result of either direct inhalation of oil or eating oiled mammals such as seals. Even under optimal conditions, killer whale pods may take decades to recover from the impacts of an oil spill3.