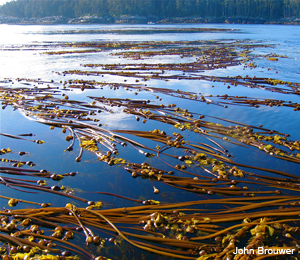 Vast underwater forests of bull and giant kelp are home base for a large food web of fish and invertebrates. They’re places for foraging, breeding and raising the young. In fact, kelp beds have been identified as major habitats integral to the overall health of B.C.’s marine ecosystem1. Most people experience kelp when it’s washed up on beaches. Kids love to pop bull kelp bulbs with their bare feet. Rotting kelp washed ashore helps to build soil that feed shoreline forests2. Giant kelp is harvested commercially for the spawn-on-kelp fishery, with most of the licenses held communally by First Nations3.

All aquatic plants – including kelps – are threatened by human activities such as contamination from vessel discharge. Kelp beds collect and retain oil for a long time4. Oil slows kelp’s germination and growth5 and can be fatal to all the sea life that relies on kelp forests for habitat.

Data Source:
The kelp polygons displayed on the map were compiled by the B.C. Marine Conservation Analysis project. The data originate from kelp surveys performed over many years by a variety of different organizations. Information on datasets for both bull kelp and giant kelp, including metadata, can be found at: www.bcmca.ca/data. BCMCA data for kelp covers the whole coast, but only data within the map study area on the North and Central Coast of British Columbia are displayed here.