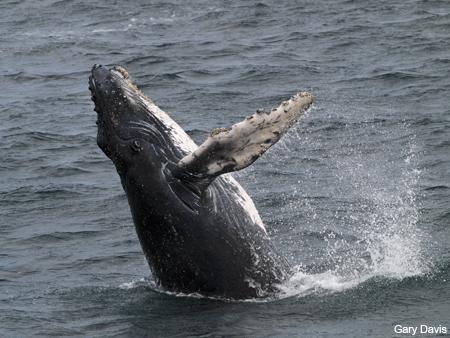 It may be hard to believe, but humpback whales were hunted in the North Pacific as recently as 1965. At that time, the humpback population had declined to a mere one tenth of its original size with only 1,000 of these giants remaining in the waters between Alaska and Hawaii1. A recent estimate of just over 18,000 individuals for the North Pacific humpback whale population suggests the population is recovering at a moderate rate2. Despite the increase, current numbers are small compared to pre-whaling estimates. Protection of this species must be maintained to ensure their long-term survival3.

Their status under Canada’s Species At Risk Act (SARA) is dynamic. Humpbacks were first listed as “threatened” in 2005 and late in 2013 a recovery strategy2 was formally adopted which designated areas of critical habitat (shown on our map and including parts of Douglas Channel). Designation of critical habitat meant the government would be required to protect humpback habitat from threats such as increased tanker traffic. In April 2014, within six months of the critical habitat designation, the government has put the Humpback Whale under consideration for down-listing to a species of “Special Concern”, negating the potential benefit to the species of critical habitat designation. Researchers fear that a new designation for the whales could result in decreased funding to study and effectively protect the species4.

Prior to 2006, scientists identified a number of ecologically and biologically “Important Areas” on the coast for humpback whales (and these are also shown on our map). They include spots from Port Hardy to Bella Coola and Sandspit, as well as in the Prince Rupert area and the northern waters of Haida Gwaii5.

One of the main threats humpbacks face is climate change, which could affect the waters and food webs where they feed and breed1. Entanglements in fishing gear, declining food stocks (krill and capelins), environmental toxins (e.g. PCBs and DDT) and underwater noise pollution are also problems3,6,7. Increased tanker traffic on the coast is also an identified threat to humpbacks due to the potential risk from oil spills3 and ship strikes7.

Data Source:
The boundaries of the Humpback Whale Critical and Important Areas were received from Fisheries and Oceans Canada (DFO). The important areas were identified as a part of a process to nominate the Ecologically and Biologically Significant Areas for the Pacific North Coast Integrated Management Area (PNCIMA). The boundaries of a few coastal sites were simplified to facilitate display in Google Earth but the area covered by each IA was not altered.