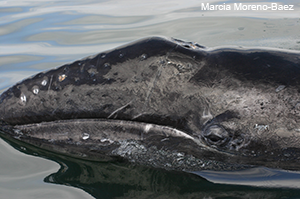 Despite extensive hunting during the 19th and 20th centuries, eastern grey whale populations are now protected and their numbers have rebounded to 18,000-24,000 whales. These creatures spend their winters in the lagoons of Baja California, Mexico and then make one of the longest known migrations of any mammal (15,000-20,000 km roundtrip) to their summer feeding grounds in the Bering, Chuckchi and Beaufort Seas. On this migration, the whales pass through B.C. waters, travelling mostly within a few kilometres of shore or in the relatively shallow waters of Hecate Strait. A small portion of these whales, known as “summer residents”, cut their migration short and spend their summers in Washington and B.C.1.

Unlike other baleen whales, grey whales feed in shallow areas using their baleen to strain out small invertebrates from the soft muddy bottom. Grey whales also feed on herring eggs and larvae found in eel grass beds during the spring and summer1.

A study published in 2013 found that most grey whales migrate east of Haida Gwaii, through Hecate Strait and Dixon Entrance.  This is contrary to what was generally believed: that the primary migration route was along the west coast of Haida Gwaii.  The inside route exposes grey whales to a greater level of industrial activity.

Grey whales are at risk from any potential oil spills that occur throughout their migratory range, along with threats such as offshore mining and oil exploration, toxic spills, industrial noise, ship strikes, fishing gear entanglements and loss of habitat2. Ingestion of toxins through eating oiled prey or sediments can damage whales’ internal organs. Contact with oil can also impact the filtering efficiency of their baleen3. Studies undertaken after the Exxon Valdez spill indicated that several species of whales (including grey whales) did not avoid oil-fouled waters3.

Data Source:
The migration routes were digitized by Living Oceans Society based on two sources: (1) Information available in the 2004 Committee on the Status of Endangered Wildlife in Canada (COSEWIC) Assessment and Status Report on the Grey Whale (Eschrichtius robustus) Eastern North Pacific Population in Canada5, and (2) Ford, J.K.B. New Insights into the northward migration route of gray whales between Vancouver Island, British Columbia, and southeastern Alaska. Marine Mammal Science, 29(2): 325-337.2