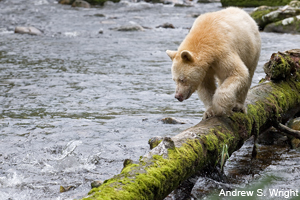 The Great Bear Rainforest (GBR) is one of the few remaining places on Earth where wild land still meets a wild ocean. The GBR contains one quarter of world’s remaining intact temperate rainforest. Roughly the size of Switzerland, the GBR is home to black bears, grizzlies and the rare Kermode, or “Spirit” bears from which the rainforest claims its name. Five species of salmon spawn in GBR rivers. Sometimes known as “Canada’s Amazon”, the GBR defines coastal British Columbia and is a source of pride for the entire country. First Nations have lived here for thousands of years.

After a decade of campaigning and negotiating, environmental groups, industry, First Nations, and the B.C. government came to a landmark agreement in 2009 to protect 2.8 million hectares of the GBR. Half of the pristine rainforest was made off limits to logging, with a commitment from the B.C. government to increase this amount to 70 percent by 2014. The agreement also included $120 million for First Nations communities in the GBR to initiate new, sustainable economies as an alternative to logging1.

If approved, the Northern Gateway project would bring an average of 225 crude oil tankers through the confined channels of the GBR, past the pristine forests and sensitive shorelines of this unique protected area.

Visit www.cold-coast.com for more photos of the Great Bear Rainforest.

Data Source:
The boundaries of the Great Bear Rainforest depicted on the map were determined based on the land resource management plan boundaries for the North and Central Coast of British Columbia. These data were developed by the B.C. Ministry of Agriculture and Lands.