Save the Fraser Pipeline Ban 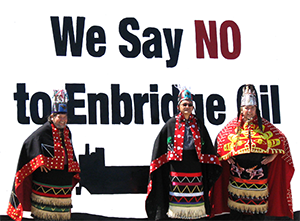 In December 2010, 61 First Nations with territory in the Fraser River watershed united in a historic alliance to declare their opposition to the proposed Northern Gateway pipelines.

“We will not allow the proposed Enbridge Northern Gateway Pipelines, or similar tar sands projects, to cross our lands, territories and watersheds, or the ocean migration routes of Fraser River salmon.”1

The First Nations see the federal review process for the project as a violation of their laws and rights under international law. Canada signed the UN Declaration on the Rights of Indigenous Peoples in 2010, but the federal government has not consulted with many of the signatory Nations downstream of the pipeline’s proposed river crossings2.

The Declaration can be accessed here.

Data Source:
The map shows the boundary of the Fraser River watershed. The watershed polygon was taken from the Province of British Columbia’s Watershed Atlas.