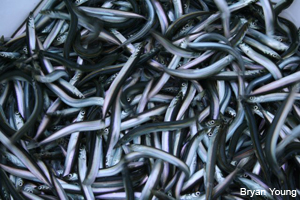 Eulachon are small, anadromous fish. This means they are born in fresh water, spend most their adult lives in salt water, and return to fresh water to spawn and die. Eulachon are “of special concern” in B.C. under Species at Risk Legislation due to recent declines in population and spawn returns. Eulachon are an important part of the Skeena and Nass River ecosystems and are of very high value within the coastal food web. First Nations rely on eulachon as an important food source and for ceremonial purposes. Eulachon are nicknamed “candlefish”1 because when dried, they retain enough oil to burn like a candle.

Although eulachon spend most of their lives in the ocean, they migrate each spring to the lower reaches of freshwater coastal rivers to spawn in gravel beds. After spawning, most eulachon die, but their decaying bodies provide nutrients to the stream and food for local wildlife at a time of year when food supplies are low1. Using best available data, our map indicates rivers in which eulachon have spawned (as recently as 2000).

Eulachon are particularly sensitive to human activities and natural events. They require special management to ensure that their populations do not decline even further. Depletion of eulachon has a detrimental effect on many other species given their role within the coastal food web. Potential threats to eulachon include industrial activities that could change or pollute spawning rivers and the ocean – such as oil tanker traffic and spills1.

Data Source: The point locations for rivers with known, probable or suspected spawning populations of eulachon were received from Fisheries and Oceans Canada (DFO)2,3,4. Based on feedback from DFO, Mussel River was added to the dataset as a probable eulachon spawning river. Eulachon rivers are found coast wide but only those within the map study area on the North and Central Coast of British Columbia are displayed here.