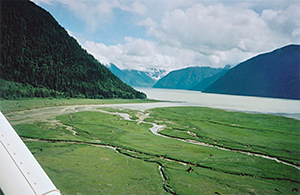 Estuaries are where fresh water from rivers and streams meets the salty waters of the ocean. They are some of the most biologically productive areas on the B.C. coast and have been called ‘nature’s smorgasbord’1. Tides carry nutrients from the ocean up into the fresh water to fuel the nearshore food web where marine plants such as eelgrass support juvenile salmon and spawning herring. Thousands of water birds nest in estuaries in the winter2. Estuarine habitats like eelgrass beds and salt marshes help in the battle against climate change. They capture immense amounts of carbon from the atmosphere, storing it in sediments where it can remain stable for thousands of years. B.C.’s estuarine environments are estimated to hold as much carbon as the province’s entire boreal forest3.

Estuaries are particularly sensitive to oil spills and clean-up efforts because they retain substantial amounts of spilled oil4. In 2006 approximately 30,000 litres of heavy fuel oil spilled from the Westwood Anette’s ruptured fuel tank at the Squamish, B.C. terminal and was blown by high winds into the highly productive Squamish Estuary. The estuary marshes were heavily contaminated5 and numerous birds were oiled. Months after the spill, B.C. Ministry of Environment officials said the estuary may never fully return to the state it was in before the accident, and they were unsure how much oil remained6.

Data Source:
The estuary polygons were received from the Pacific Estuary Conservation Program (PECP). That program mapped estuaries along the coast and then ranked them based on their importance for waterfowl. More detailed estuary polygons, attributes and a technical report are available from the PECP. Estuaries are found coast wide but only those within the map study area on the North and Central Coast of British Columbia are displayed here.