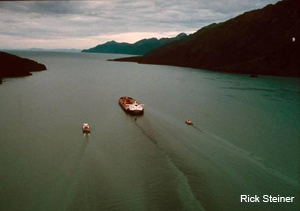 A long-standing moratorium has kept B.C.’s inside coastal waters free of bulk oil tanker traffic since 1972. The moratorium was put in place to protect the coast from an oil spill. However, the federal Conservatives maintain that the ban is voluntary – not legislated – and have allowed Methanex and Encana to import condensate (a highly flammable hydrocarbon used to thin the tar-like oil extracted from the tar sands) in tankers to the Port of Kitimat since 2006.

Clearly, the strength of the moratorium is in question and there is wide-ranging support for a permanent, legislated tanker ban on Canada’s Pacific North Coast. According to a recent poll, 80 percent of British Columbians support a ban on oil tanker traffic in B.C.’s inside coastal waters. A legislated ban is also supported by over 80 First Nations in B.C.

In December of 2010, NDP MP Nathan Cullen put forth a motion in the House of Commons that would ban bulk oil tanker traffic on B.C.’s North and Central Coast. The motion passed 143-138. The motion was non-binding however, and Prime Minister Harper was quick to state he had little intention of honouring the decision.

On the heels of this vote was a Private Member’s Bill tabled by Liberal MP Joyce Murray proposing a ban on crude oil tanker traffic in Hecate Strait, Dixon Entrance and Queen Charlotte Sound. We need to help keep this bill moving by showing our MPs we support their work!

Data Source:
This layer displays the area covered by the Private Member’s Bill.