Another small Japanese vessel has been located intact among masses of debris accumulating on Vancouver Island’s western shores. Living Oceans Society’s Will Soltau made the discovery while on helicopter surveillance over the west coast of northern Vancouver Island on January 16. The small boat was approximately six meters in length, similar to a skiff found on Spring Island outside the village of Kyuquot, B.C. in August 2012. 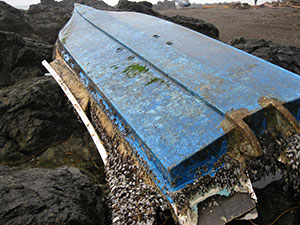 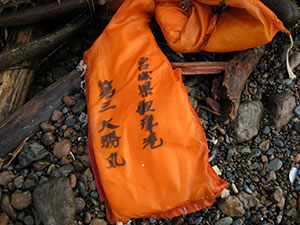 “We landed on the beach but the skiff was too encrusted with gooseneck barnacles to find a vessel ID plate,” said Will Soltau, manager of Living Ocean’s Clear the Coast marine debris program. “We found two lifejackets with Japanese writing very near to the boat so we took photos of everything and sent those to the government agencies managing tsunami debris.”

Through Clear the Coast, Living Oceans is organizing the drive to find, remove and dispose of marine debris from the surface to the seafloor around Northern Vancouver Island. The program is tackling ghost fishing gear, inter-tidal debris and derelict vessels—all growing issues facing coastal communities because marine debris affects ocean health.

Peter Barratt, Operations Manager at West Coast Helicopters, was piloting the helicopter on the reconnaissance trip north from San Josef Bay to the south shore of the Brooks Peninsula when the debris was spotted.

“There has always been debris on the beaches.” Barratt said. “But from my past experience, the amount of debris—especially Styrofoam—is really increasing.”Barratt has been flying helicopters over northern Vancouver Island for more than 30 years.

The boat’s location has been reported to Transport Canada who will try to identify the vessel from the photos.

Clear the Coast is coordinating the efforts of northern Vancouver Island volunteers, community organizations, service clubs, businesses and local governments that want to pitch in by cleaning up the local waters and shorelines. West Coast Helicopters is partnering with Living Oceans  to assess the situation on the beaches.

Will will be making presentations about marine debris to local groups throughout the winter, and will coordinate clean-up efforts beginning in summer 2013. Find out more about our Clear the Coast program where you can find an on-line debris reporting form and an interactive map cataloguing the reports and clean-up activities.