Living Oceans has been participating in B.C.’s policy development process for oil spill response since it began under the Christy Clark government and the recent provincial announcement that the process will move on to its next phase should not have caused so much as a raised eyebrow. Well, maybe the part about restricting tarsands shipments until the science is done seemed new—but only if you had never read the fine print from the National Energy Board’s recommendations for both Enbridge Northern Gateway and Kinder Morgan’s Trans Mountain pipelines.

Both NEB reports recommended a condition requiring the companies to conduct further study into how spilled dilbit behaves.They were supposed to set up science panels and do the research and file it; they were supposed to prove they could respond effectively to spills in both fresh and marine environments.

What has happened since? No publicly reported science, certainly; and nothing indicates that the research questions posed by North America’s two blue-ribbon academic institutions are being addressed. Both the Royal Society of Canada and the U.S. National Academy of Science have called for more research and underlined the fact that neither Canada nor the U.S. appears to have effective regulatory tools in place to manage the transportation of dilbit.

In fact, the only clear development since the approval of these pipelines has been a massive investment by Kinder Morgan in new oil spill response centres, all equipped with the same conventional spill response equipment that is completely ineffective for submerged or sinking oils. When Executive Director Karen Wristen toured Western Canada Marine Response Corporation’s facilities last year, the company displayed the equipment available and admitted they have none, either in stock or on order, that could deal with tracking and responding to a spill once it is no longer floating. 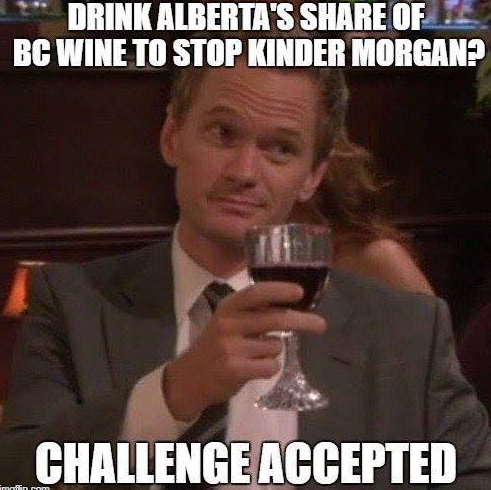 The ugly responses from Alberta and Canada to B.C.’s announcement that it wants to see the science come first are really a window into how dubious the financing for Kinder Morgan’s Trans Mountain Pipeline must be: so dubious that both governments resorted to blackmail in defense of the project. We figure Rachel Notley backed down when Karen pointed out in a Vancouver Sun article that Alberta's vendetta against BC wines was a pure gift to the campaign, bringing more people onside because the trade action was so manifestly unfair. Our thanks to Premier John Horgan and Environment Minister George Heyman for staying the course and we'll look forward to seeing what the court has to say about the right of a province to protect the health of its citizens and its environment.