Just when you think you’ve got a good routine going and you know what to expect, nature throws her curve ball…

Our main expedition of the year, to Sea Otter Cove, started off much the same as it has the past five years: a reasonably warm, calm day for sailing around northern Vancouver Island aboard our sailboat, Viajador, with several volunteers on board and more expected to meet us in the Cove by kayak. The trip out went well enough—just some big rollers as we rounded Cape Scott, but that’s to be expected.  It was about the last thing that went as expected! 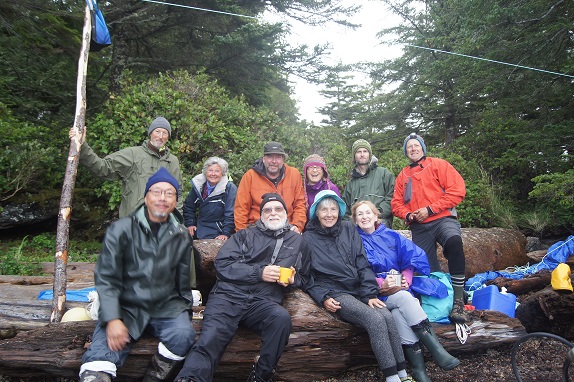 The day following our arrival, a gale began to blow from the southeast.  Most summer winds blow from the northwest and our campsite is accordingly positioned to shelter from a northwest wind. We put up a windscreen in the camp cooking area and secured the tents well; and we put an extra line on Viajador to doubly secure her to the mooring buoy. Peeking out of the Cove to see what conditions the kayakers would face coming in from San Josef Bay, we concluded that they’d never arrive: the rocky outcrops we could see were being pounded by waves as tall as houses.

It was with some surprise that we greeted the intrepid kayak crew a few hours after concluding they couldn’t make it! The rollers had been so big that they couldn’t see one another in between them, but everyone arrived safely, if wet.

The gale had barely blown itself out when a storm came in and this one, also southeast, was serious. A neighbouring sailboat with an anemometer clocked the sustained winds at 55-58 knots, with gusts up to 67 knots (that’s 124 kilometers per hour, or hurricane force). We set watches on the sailboat throughout the day and night; and shredded four robust mooring lines before the storm ended, as if a switch had been flipped, at 1:45 in the morning. When the sun rose the next day, the seas outside the Cove were still at 5-7 meters.

Our amazing volunteer crews worked right through the weather. We hiked to the most sheltered beaches when it was at its worst; and took advantage of every calm period to use the boat to transport crews to the more exposed areas. We managed to get to all of the beaches that we’ve cleaned for now six consecutive years; but that’s where the next surprise came in.

There was hardly any debris.  Well, a tonne and a half, as it turned out, but compared with our usual 5-10 tonne cleanups, it seemed like nothing.

I’d like to think that the reduced debris recovery is explained by our consistent efforts on the North Island. We have removed 43.4 tonnes of plastic from the region since 2014. However, something else must have been at play, because there was also a very dramatic reduction in the number of beached logs we encountered. The outer beaches of San Josef Bay, in particular, usually look like a giant game of pickup sticks, but this year, we exited the trail onto a virtually empty sand beach. Winter wind and waves drive most of the debris onto these beaches and we speculate that wind patterns must have been as unusual over the winter as we found them to be in August!

We are greatly indebted to the Canadian Wildlife Service this year, for providing the helicopter services necessary to removing the debris, which would otherwise impact the newly created Scott Islands marine National Wildlife Area, a vital nesting area for seabirds. Our thanks as well to the Regional District of Mount Waddington for waiving tipping fees for the non-recyclable portion of the debris; and to Dan Carter of Port Hardy for transporting the debris and looking after us while in town. Boating BC Association and BC Parks each provided grants of cash that helped with the hard costs of moving the people, boats and vehicles. And of course, our warmest thanks to all of you who contributed to the programme this year: without you, there’d have been no hot food for the volunteers who worked so hard to bring it all in.