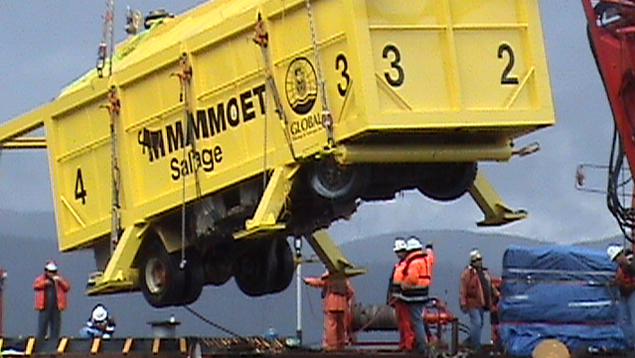 In August 2007, a barge carrying logging equipment accidentally spilled its load into Robson Bight Ecological Reserve, a critical habitat for the Northern Resident killer whales which are listed as a Species at Risk. The spilled equipment contained an estimated 19,000 litres of fuel and hydraulic fluid including 10,000 litres of diesel in a fuel truck.

A whale watcher on the scene contacted our Sointula office and a local float plane company volunteered to take one of our staff for a fly over. That evening, video of the listing barge shot by Living Oceans was seen on TV news broadcasts worldwide.

In the two days after the spill, 50 orcas, representing 20 percent of the Northern Resident population, swam through the diesel for up to six hours. When the authorities refused to inspect the sunken fuel truck, we shared our concern about the whales with our supporters and appealed to them for help to mount an underwater investigation of the wreckage to assess whether the whales—and the rest of the ecosystem—were at risk from leaking fuel.

The response was incredible. Over 1,500 people wrote to the Canadian Government asking them to authorize the investigation by Living Oceans Society and our partners, and sufficient funds were donated to conduct the investigation. Then, just hours after we announced publicly that we would survey the wreckage ourselves, the federal and provincial governments stepped forward and said that they would conduct the investigation. Within one hour of launching the submarine on the first day of the investigation, the fuel truck was discovered sitting upright and intact on the ocean floor.

With proof that the fuel truck and other equipment still posed a threat to the whales, Living Oceans Society worked with the federal and provincial governments to ensure the most harmful equipment would be removed. In May the fuel truck with all 10,000 litres of diesel was successfully recovered from Robson Bight. The owner of the barge has since been convicted of several pollution-related charges, but the incident highlights the need for better regulation of shipping, especially in ecologically sensitive areas like Robson Bight.