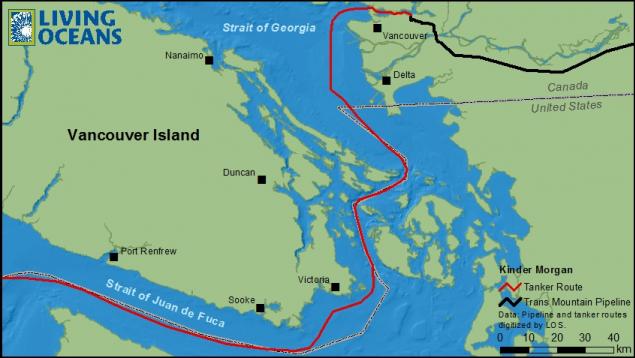 In 2005, Kinder Morgan bought the TransMountain Pipeline which runs from Edmonton, Alberta to Burnaby, British Columbia. They announced plans in 2011 to expand their capacity by building a parallel line. In 2012, they announced a further capacity expansion to a new total of 890,000 barrels of oil per day.

The original pipeline was built in 1953 without the benefit of public or environmental scrutiny and there was no public review when, in about 2006, it began shipping diluted bitumen (dilbit) as well as other crude and refined oils in the pipeline.

Dilbit is a mixture of tarsands bitumen and a byproduct of natural gas production called ‘condensate’. Condensate is highly volatile, liable to explode and gives off vapours that are poisonous (hydrogen sulphide) and carcinogenic (toluene and benzene).

Kinder Morgan’s proposal arouses all the same objections as does Enbridge’s Northern Gateway, with the addition of a large, urban centre ringed by mountains as a backdrop to its spill scenario. Spills from this project place at risk First Nations’ traditional and subsistence rights, the health of over 1.5 million people and countless migratory birds, fish and marine mammals.

In this hearing, we worked with other intervenors including First Nations and the City of Vancouver to produce the best possible expert evidence on the impacts of the project. Read more about how we’re working to stop the TransMountain Expansion Proposal.