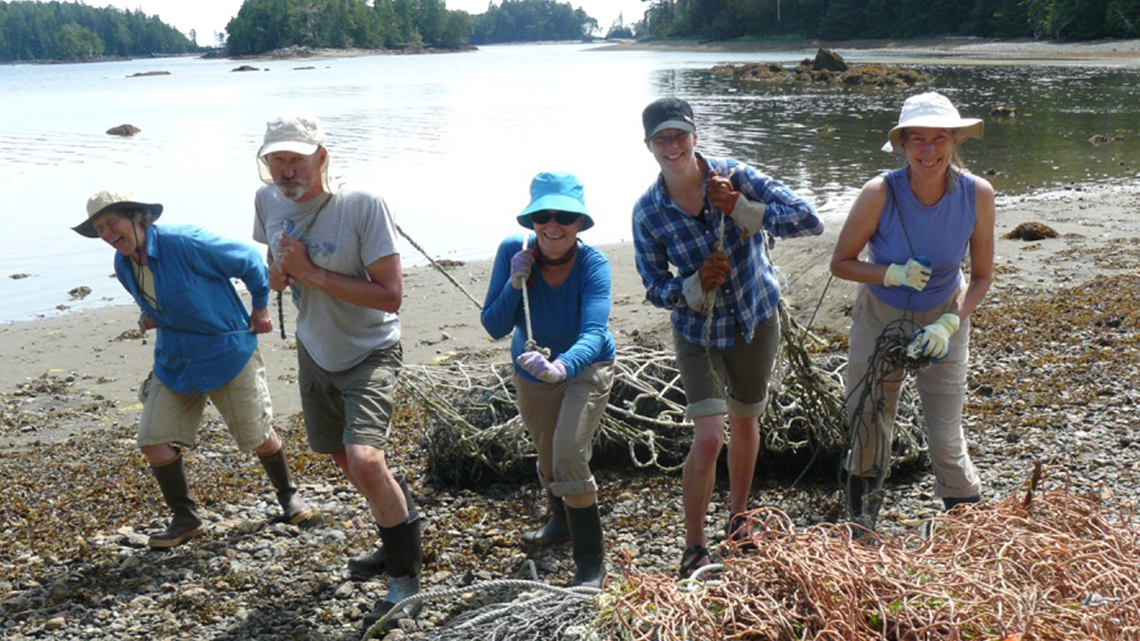 Thanks to all of you who voted for us day after day in the ADP contest. Because of you we won and we're using the $10,000 grant to help support our Clear the Coast campaign. Photo: Linda Weaver

You'll likely remember that last year, I planned to do some high-res video helicopter surveillance of these islands to see how marine debris was impacting them. Well, while we were in Sea Otter Cove in August, we asked Kathryn Wyks, our helicopter pilot, to take a peek for us.

"Lanz and Cox Islands are choked," Kathryn reported. "From the air I can see tonnes of styrofoam, probably much the same kind of debris as you're seeing here."

The waters surrounding the Scott Islands are designated to become a marine National Wildlife Area, supporting the bird colonies as well as incredibly rich and diverse marine life. Sea otters, not nearly as sociable as their river otter cousins, prefer to hang out here, where few humans ever tread. Plastic marine debris poses a variety of hazards for all of this marine life. 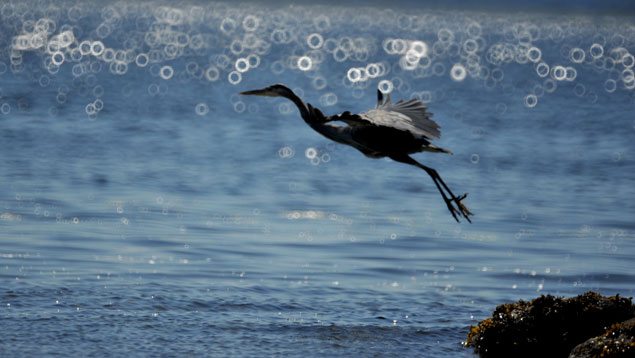 To get to Lanz and Cox Islands, we're going to need your help!

When my husband and I sailed by Lanz and Cox on the way to Sea Otter Cove, their rocky outcrops looked forbidding. Warnings about the currents at Cape Scott and surrounding the Scott Islands take up pages in our sailing guide, roughly summarized as 'six ways to sink your boat at Cape Scott.' Fog frequently compounds the danger and if the Pacific decides to kick up a storm, it's coming at you all the way from Japan.

I asked Kathryn about the approach. "I think you'll need to plan to have me land you," she replied. Speaking with Jessie Moore at BC Parks about this confirmed the plan. "You might be able to land some kind of boat there in really calm weather—there is a sheltered bay—but to be safe, you'd have to have helicopter backup planned," she warned.

So here's the plan:

We're going to leverage all the great work that our Clear the Coast campaigners Will Soltau and Carmen Pendleton did last year, by doing it pretty much the same way. We'll take a volunteer team out to Sea Otter Cove in a boat large enough to sleep the whole team (Captain Paul Ross on Samphire may be available again this year, depending on our timing) and we'll get to work clearing Sea Otter, Lowrie and San Josef Bay again this year—we know that there will be another year's accumulation of plastics to remove.

At the same time, we'll watch the weather and sea state for an appropriate time to approach Lanz and Cox, whether by boat or air. We'll bring a second team of volunteers out by road as far as San Josef Bay, where they can camp (and clean up) while awaiting transport to Lanz and Cox. There is a very small operational window at the end of summer before weather conditions begin to make access to these islands impossible.

There are a number of groups working on various parts of Vancouver Island's west coast and we co-ordinate with them monthly, so we'll try to organize helicopter support for a day when we can all share it, removing debris from hard-to-access areas onto barges and positioning our teams on Lanz and Cox. Our 'away teams' will likely need to spend a couple of days on the islands, collecting, bagging and preparing debris for transport. They will also be collecting some samples for our science program. We'll coordinate with the Canadian Wildlife Service to ensure that our work is as minimally disruptive of bird colonies as possible. 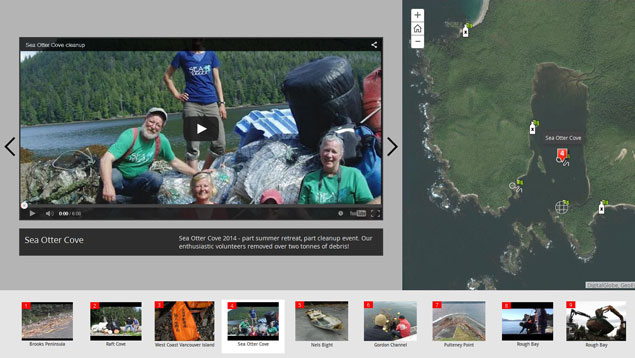 This year, with your help, we can add to the rapidly growing body of science concerning the impacts of plastic debris.

Last year, we took soil samples from Sea Otter Cove that we're analysing right now at the University of British Columbia, with the help of some great volunteer scientists. We're finding microplastics in the beach sand, meaning these beaches are going to suffer some long-term effects from the debris. In order to understand the magnitude and nature of that problem, we need to do some more sampling this year. I spoke with Dr. Peter Ross at the Vancouver Aquarium about the sampling protocols a couple of weeks ago and he agreed that working out some common methods would be essential to developing a good body of science on microplastic pollution.

This is what we need:

Can you help us clean up the Scott Islands?

Would you please consider making a donation to support our work? We're expecting a little help from BC Parks, with whom we have a working agreement for marine debris removal. And we have that grant you helped us win from ADP. There are some other possible grants, but nothing firmed up as of yet.

Join us! Last summer we removed 2.67 tonnes of debris from seven km of shoreline in Sea Otter Cove, Lowrie Bay and San Josef Bay. This included plastics from every Pacific nation including our own. We couldn't have done it without our crew of volunteers. Perhaps you'd like to join us this year for a few days and enjoy this spectacular wilderness, leaving with the knowledge that you helped preserve it for another traveler to enjoy? Sleep on board or camp, as you prefer; enjoy exploring the cove, hiking and fishing in your downtime. Contact me at kwristen [at] livingoceans.org if you'd like to lend a hand.

Clio Channel salmon farm applications the tip of the iceberg

Last month we sent out an Action Alert urging you to voice your opposition to Grieg Seafood’s proposed salmon farm tenure applications in Clio Channel. Over 1,800 of you were moved to act and we thank each and every one of you for your support. In addition to your written submissions, there was a strong contingent of North Island residents—many from Sointula—who showed up in person at the open-house event held by Grieg in Port McNeill. Living Oceans also followed up with B.C. Ministry of Forests, Lands and Natural Resource Operations, Fisheries and Oceans Canada, as well as Transport Canada by submitting eight pages of objections during the comment period.

Unfortunately, Grieg’s application is just the tip of the iceberg. There are six new salmon farm tenure/licence applications and five additional applications for tenure/licence expansion. The salmon farming industry wants to expand their operations by more than 43 percent by 2020. And it looks like Fisheries and Oceans Canada is prepared to let them move ahead with their plans in spite of the recommendations of the Cohen Commission.

As a result of changes made in the 2012 omnibus budget bill, aquaculture operations no longer need to complete a full environmental impact assessment when they want to expand. Also, public opportunities for comment or input into the tenure and licensing process have been limited. Despite this reality, we’re committed to keeping you informed of what’s happening on the coast. We’re tracking the new applications, submitting comments and objections where appropriate, ensuring that proposed new tenures or tenure expansions are aligned with regional marine plans. Keep an eye on your inbox or follow us on Facebook and Twitter to be sure you get all of our updates.

Streamlined Environmental Assessment - and how that’s working out

When the Harper government changed the environmental assessment law in 2012, they said it was to ”streamline” a process that was susceptible to being ”hi-jacked” by opponents intent on ”interfering” with energy projects. The government was referring to the fact that thousands of citizens chose to participate in the Northern Gateway public review process. Public review processes were invented to involve the public in decision-making. For the Harper government, this is “interference.”

Under the new law, the TransMountain Pipeline assessment hearings were supposed to be wrapped up in just 15 months. In order to do that, one of the most important procedures in our legal system was discarded: cross-examinations were replaced with a written “Information Request” process that was supposed to be faster. The Hearing Order set fixed dates when we could ask questions about the evidence presented by TransMountain.

Yet 11 months after the NEB declared Kinder Morgan’s application complete, pulling the trigger on all those timelines, the company is still seeking leave to file new evidence to fill the many gaps in its application.

What was missing from the 15,000 page application filed in December 2013? Kinder Morgan hadn’t figured out the pipeline route. That was critical, because only people who are “directly affected” by the project were allowed to intervene. And how would we know who is directly affected when we don’t know where they want to put it?

Also missing at the time the NEB declared the application “complete” was a Human Health Risk Assessment and an Emergency Response Plan. The TERMPOL report—a federal committee review of plans for the port and marine component—wasn’t filed until December 2014. Now, the company seeks leave to file geotechnical evidence that is critical to the assessment of spills.

All of these deficiencies (and dozens more) have caused delays, extensions and/or additional rounds of information requests that have combined to extend the hearing’s timelines and increase the workload of the assessment for all parties quite dramatically. Kinder Morgan’s failure to answer those information requests led to thousands of hours of work on motions compelling them to answer, only to find the NEB ruling that the information is unnecessary. (So much for our substitute for cross-examination.)

Maybe the NEB should have waited until Kinder Morgan had all its ducks in a row to start the hearing. It’s supposed to be over by now. Instead, we’re waiting for new evidence to be filed (and yet another round of information requests) even as we face a May deadline to file our experts’ reports assessing that very evidence.

According to the revised schedule the hearings will close in October, with the NEB’s recommendations going to Cabinet by January 2016. By then the process will have taken 21 months and it may stretch longer. The panel reviewing the Northern Gateway application heard from all interested parties, held oral cross examinations and heard oral arguments; it delivered final recommendations after 31 months.

At what cost has the Harper government expedited the TransMountain assessment by 10 months? Public participation, procedural fairness, expert assessment and development of effective mitigation measures have all been compromised—and that is just about every reason we have to hold public environmental assessments.