The Open Ocean: Help is on the Way
The high seas are the last of our planet’s ungoverned territory but it appears that this is about to change—good news for the ocean, at last! This week, the Global Ocean Commission released a new report outlining a rescue package for ocean areas beyond national jurisdiction that would:

The report calls for a new agreement under the United Nations Convention on the Law of the Sea that would impose international governance, with goals and monitoring overseen by a committee of scientists and others.

We welcome the report and fully support its recommendations. It will be a mammoth task to achieve these goals, but the only way it can be done is through international co-operation, education and enforcement. We will follow developments closely and let you know when it’s time to encourage the Canadian government to sign on to the new agreement.

Clear the Coast kicks into another season

Another season of Clear the Coast is underway. Will Soltau, Clear the Coast Project Coordinator, is organizing volunteer cleanups throughout northern Vancouver Island. We’ve already been busy working with local volunteers to remove marine debris and improve ocean health along this rugged shoreline.

It’s a sad fact that no matter where one goes ashore these days or how often and how many volunteers clean beaches, the debris—mostly plastic—keeps coming, breaking down into smaller and smaller bits from the energy of the waves and the sun. During its time in the ocean, plastics collect organic pollutants from the seawater and those, too, enter the food web. The marine life affected will suffer a variety of ills, some of which will be passed down from generation to generation. Washed up ropes and nets pose an immediate entanglement threat to wildlife. It all must be removed.

It's a big job but Living Oceans has the experience, local knowledge and networks to get it done. 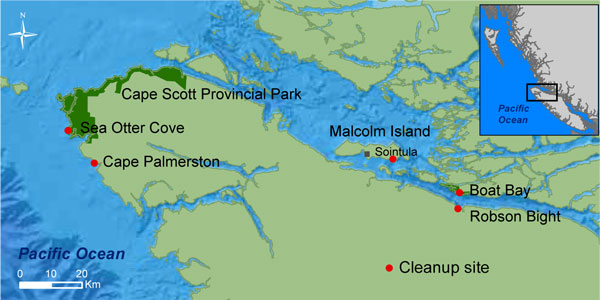 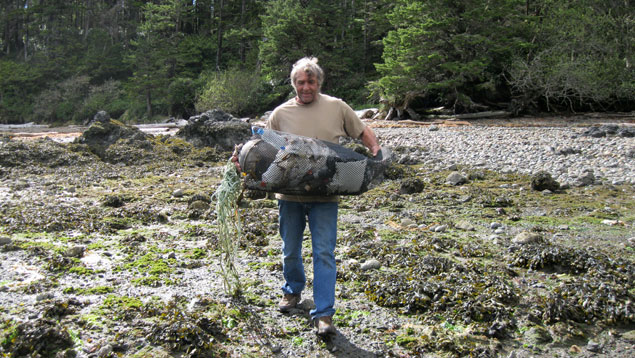 A team of three ventured out by boat to Sea Otter Cove in late April. The volunteers were shocked at the accumulation of debris in this important wildlife habitat within the Cape Scott Provincial Park. They found everything from a refrigerator to thousands of plastic bottles to a broken skiff and derelict fishing nets that stretched across the intertidal zone. They gathered up what debris they could, vowing to return this summer with more volunteers and better equipment to tackle the problem.

We're running a crowdfunding campaign to help raise money to Clean up Sea Otter Cove. Any money that we raise for Clear the Coast between now and August will be matched by singer Jack Johnson's All At Once organization, a social action network connecting nonprofits with people who want to become active in their local and world community. Living Oceans has teamed up with Jack on his 2014 From Here To Now To You Tour. All At Once comes to life online at www.AllAtOnce.org and at Jack Johnson's concerts where you can get educated, get inspired, and connect face-to-face with us and other local and national non-profits. All At Once promotes sustainable local food systems and plastic free initiatives.

On the other side of Vancouver Island, Will and three volunteers from Malcolm Island joined forces with members of the ‘Namgis First Nation, Cetus Research and Conservation Society, BC Parks Rangers and other locals to attack the marine debris on the shores of the critical orca habitat of Robson Bight and Boat Bay Ecological Reserves in Johnstone Strait. The good news was that Robson Bight itself was relatively clean, but sadly, Boat Bay was once again covered with debris. A full day of hard work by over 20 volunteers netted the largest haul of debris yet for this annual cleanup.

Fifty-four beverage cans, four tires, over 200 pieces of Styrofoam and one freezer. That’s just a small part of the haul of marine debris collected from the shoreline of Malcolm Island on our Oceans Day cleanup on June 8. In all we had two pickup truck loads full of debris. 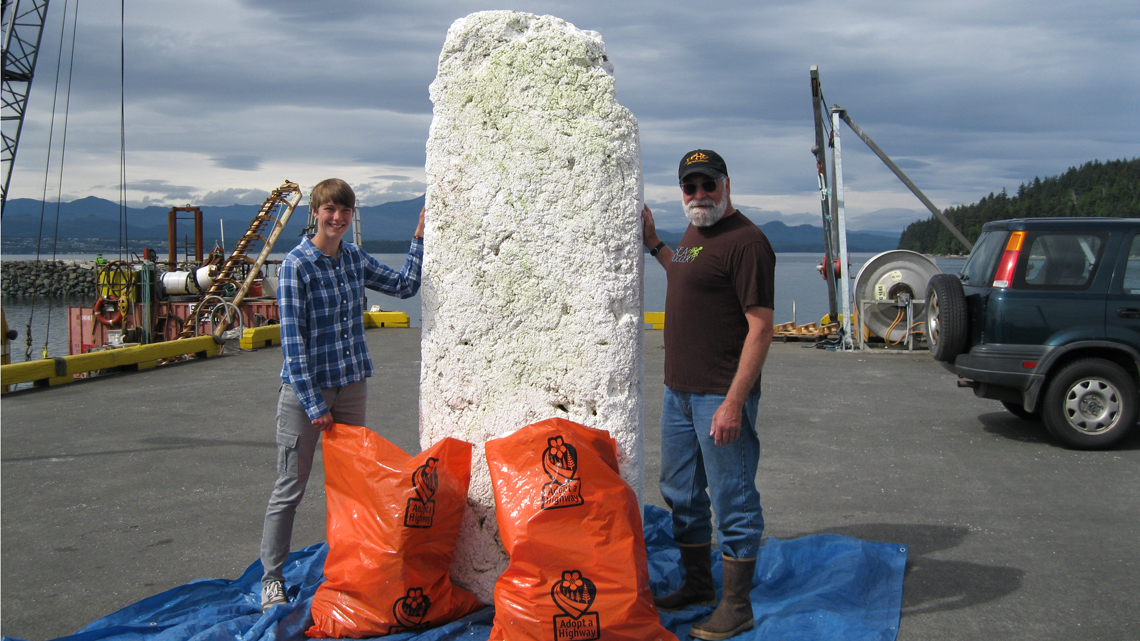 The drizzly start to the morning didn’t deter the enthusiastic participants, ages two to 70-plus who turned out. We were glad to see a few new faces along with a dedicated group of returning volunteers participating in this annual cleanup. The focal point of the cleanup was Kaleva Beach which had chunks of Styrofoam scattered along the high tide line.

On another day, Will and Carmen Pendleton, our summer student, headed out in a herring skiff to retrieve debris cached by volunteers over the winter. Carmen collected two large garbage bags of foam and plastic debris in less than 100 metres. Will walked the other direction and, as well as collecting a bag of debris, found a piece of Styrofoam that was taller than him!

See where volunteers are reporting debris and clearing the coast on our interactive Clear the Coast map.

You can become a part of the solution even if you can’t get to a beach by supporting our project with a donation. Remember to reduce your consumption of plastic and be sure to reuse or recycle what you can’t reduce.

Northern Gateway: What still stands in the way?

The federal cabinet’s approval of the Enbridge Northern Gateway project was the oddest event—or non-event—in the Harper Government’s tenure. The low-key announcement itself was odd for a government that has touted the project from the get-go. Instead of spouting worn rhetoric and inflated benefits claims, the only numbers cited in the June 17 release related to the ‘exhaustive’ review and the 209 conditions the Joint Review Panel placed on the project.

Then, after the release was sent out, every last Conservative MP went to ground, perhaps hoping they could escape being tagged with responsibility for the decision. A lone staffer was left to protest that it wasn’t an approval at all, just a ‘maybe’, because the 209 conditions had yet to be met.

What really stands in the way of the pipeline?

Any one of those obstacles could stop Northern Gateway. Only the last one also holds out hope for restoring Canada’s democracy, environmental law, international reputation, science and reason. That hope rests on Canadians actually turning out to vote and voting strategically, to ensure a majority government elected by a majority of the people. 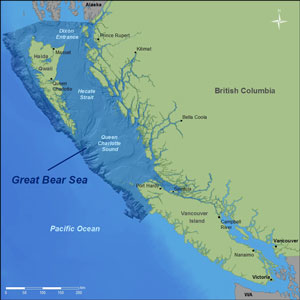 The Province of B.C. and 18 First Nations have partnered to develop a plan to protect the Great Bear Sea and the people and economies it supports. Living Oceans has represented the conservation community at these meetings, along with people from the tourism, aquaculture, forestry, commercial fishing and other sectors.

“The government has an opportunity to chart a way forward to protect a way of life on the coast,” said Morag Carter, Director of Marine Planning and Protected Areas. “The Great Bear Sea ecosystems support billions of dollars in economic activity that we can’t risk losing forever.”

This summer, the province of B.C. will decide whether to adopt these plans to protect our ocean. You can help nudge the politicians to make the right choice for the future of our children. Join us in seizing this historic opportunity. 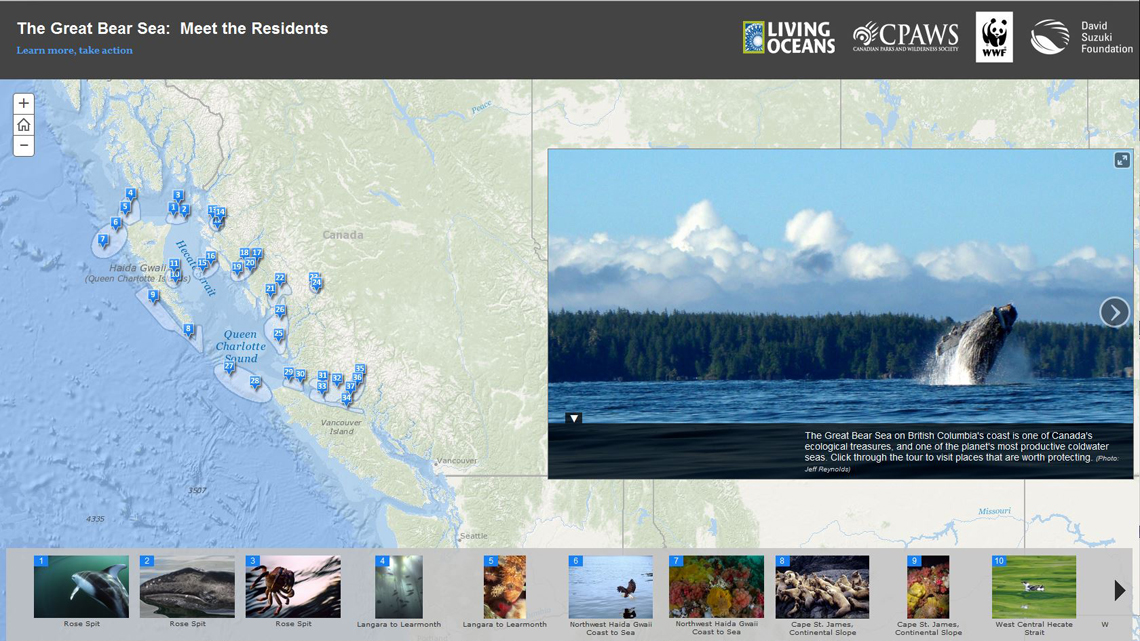 Eating locally has become a great new trend with restaurants and shoppers. With fruits and vegetables it’s easy to find out where your meal is grown. But do you ever wonder where your seafood comes from?

B.C’s commercial fishermen provide some of the best, most sustainably caught seafood in the world. Living Oceans has teamed up with Skipper Otto to introduce Metro Vancouver seafood enthusiasts to Skipper Otto’s Community Supported Fishery (CSF), a program that connects local fishermen and local customers for direct seafood sales all summer long.

“Buying directly from your local fishermen is better for you, better for the fisherman and better for the ocean,” said Jenna Stoner, Sustainable Fisheries Campaign Manager. “Initiatives like Skipper Otto’s CSF are critical to creating a more resilient and sustainable seafood system.”

CSF members buy in at the beginning of the season and receive a share of premium, wild, local, sustainably caught seafood. Members have boat-to-fork transparency; they know who caught their fish and how, when and where that was done. Fishermen can earn a sustainable livelihood, remain independent owner-operated, and continue using the small-scale, sustainable fishing practices they have used for generations. Overall, it’s a win-win-win situation!