Taxpayers would foot most of the bill for a spill 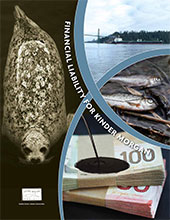 Canadians could be on the hook for as much as 90 percent of the cost of an oil tanker spill, according to our latest report on pipeline and tanker proposals. Financial Liability for Kinder Morgan, comes on the heels of the company’s recent announcement it has upped its expansion proposal for the TransMountain pipeline through Metro Vancouver, to enlarge the pipeline’s capacity to 890,000 barrels of oil products, including diluted bitumen, per day.

That increase would mean more than 400 oil tankers per year loading up in Burnaby and cruising past Stanley Park to English Bay and out into the Salish Sea, already considered one of Canada’s most at-risk bodies of water. The shipping route passes through the southern Gulf Islands and the Strait of Juan de Fuca before reaching the open ocean.

Currently, about 80 tankers each year take on oil products at Westridge Terminal in Burnaby. The proposed escalation, when combined with other plans to expand shipping on British Columbia’s South Coast would mean a phenomenal increase in the risk of a serious oil spill in B.C.’s most populous and most visited regions.

“We analyzed the funds available to pay for spill response costs and damages caused by a major tanker spill,” said Karen Wristen, Living Oceans’ Executive Director. “The insurance would provide only $1.34 billion, or about one tenth of the estimated cost.”

It is a telling fact that no-one has as yet tried to calculate the actual economic loss to the southern B.C. economy that would follow on a major oil spill. However, when Washington State examined the potential impact there, they concluded that losses would amount to 165,000 jobs and $10.8 billion in economic activity. A recent UBC study concluded that a major spill in northern B.C. waters would cost the economy a similar amount. And the Exxon Valdez spill is variously estimated to have cost the company between $9 to $12 billion—and it’s still not cleaned up.