Living Oceans filed a formal complaint at the end of April against the certification of Marine Harvest’s Marsh Bay salmon farm under the Aquaculture Stewardship Council (ASC) program. The farm is the first salmon farm in North America to be approved under the ASC certification program, making it a precedent setting case. This is concerning as the Marsh Bay site continues to report alarmingly unsustainable on-site practices.

Since receiving certification in January 2015, the open net-pen farm reported the accidental drowning of four sea lions in its predator nets and in April its sea lice counts soared to dangerous levels. Either of these events would have disentitled it to certification had they occurred during the third-party audit conducted by SAI Global.

Marine Harvest applied for certification of its Shelter Bay farm at the same time as the Marsh Bay farm, but had to withdraw that application when six sea lions were found entangled and drowned in its nets during the audit process. 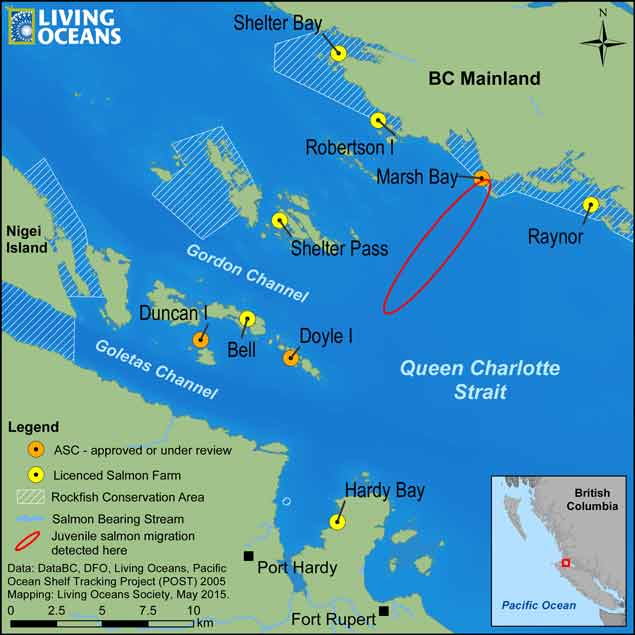 Our complaint alleges that the Marsh Bay audit failed to conform to the basic requirements of the ASC standard. For example, the on-site audit was performed five months before harvest activities were scheduled to begin, although a farm’s initial audit is supposed to include harvesting and certain sampling that is only possible when the farm is at peak biomass, just prior to harvest. This resulted in a major non-conformity that could not possibly be reconciled within the rules: any major non-conformity has to be closed within three months or the audit has to be repeated.

Marine Harvest has applied for ASC certification of its farms at Duncan and Doyle Islands. The audits will be done in June.

B.C. salmon farming companies Cermaq, Grieg and Marine Harvest have publicly committed to get all of their farms certified under the ASC program by 2020. With this level of looming industry pressure and expectancy, it becomes extremely important to ensure that the certification audits are done properly. This is, indeed, the only way to ensure that true progress is being made on the water, not just on paper.