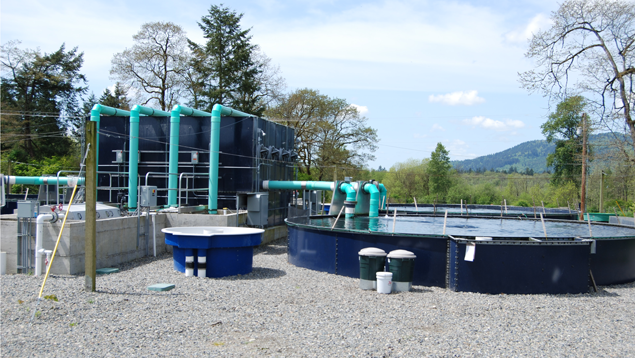 Canadian "organic" farmed salmon began appearing on supermarket shelves and restaurant menus in 2013, thanks to the Canadian General Standards Board's (CGSB) May 2012 release of the Canadian Organic Aquaculture Standard, sponsored by Fisheries and Oceans Canada (DFO).

While some types of farm-raised seafood (such as farmed shellfish) follow more stringent guidelines to protect the health of our oceans, the "organic" salmon farming standard varies little from conventional open-net cage practices.

Shoppers trust that any food product certified as organic is going to meet certain basic standards. It seems intuitive that the same organic principles that exist for land-grown organic produce, livestock and dairy should also apply to farmed fish. Unfortunately this is not the case.   The Canadian Organic Aquaculture Standard allows for the use of synthetic pesticides (parasiticides), non-organic feed with the unlimited use of wild fish in feed and the inherent risks of open-net cages including disease and parasite transfer, uncontrolled waste directly into the ocean and escapes.

Land-based closed containment aquaculture can greatly reduce or eliminate these environmental risks, and is more compatible with organic principles, but its use is not required by the new standard.

As a standard committee member, Living Oceans voted ‘no’ to the standard because of our concerns about open net-pens and their environmental risks. We advocated instead for the standard to require the use of closed containment for finfish operations as these systems are more aligned with organic principles. Unfortunately, largely due to the industry and government bias of the voting membership, open net-pens remained in the standard.