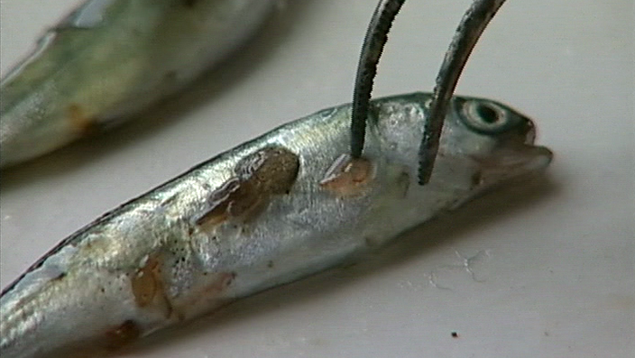 Parasites occur naturally in the wild, but confining large numbers of farmed salmon in open net-pens over long periods of time creates artificial environments for parasites like the sea louse to multiply and spread. Their eggs are dispersed by the currents and can travel freely into and out of net-pens. Many salmon farms are located in more sheltered areas of the coast that are important migration routes of wild salmon.

All salmon - farmed or wild - enter the ocean from fresh water lice free. Sea lice are naturally-occurring on adult wild salmon, which are large enough to withstand typical levels of lice infestation. It is the out-migrating juvenile wild salmon, often weighing less than one gram that can fall victim to heavy lice loads originating in salmon farms.

The placement of salmon farms on migration routes disrupts a natural balance: normally, when wild juveniles migrate from their natal rivers to the open ocean there are few, if any, sea lice waiting for them. Lice that arrived in coastal waters in the fall, clinging to in-migrating adult salmon, dropped off when those salmon entered fresh water. In the absence of host fish, lice cannot multiply and infect the outgoing juveniles next spring.

A global assessment by researchers at Dalhousie University showed that wherever there are open net-pen salmon farms, sea lice levels on wild salmon and trout are higher and those wild populations are declining at a faster rate than in nearby areas where there are no salmon farms.

Parasites can also weaken a fish's immune system and spread infections that can lead to disease.  Click here to read a recent literature review by Dr. Lawrence Dill.

Once sea lice from wild sources become established in a farmed salmon population the only way to control them is through the use of parasiticides. In the Atlantic Ocean sea lice are becoming increasingly resistant to certain parasiticides, forcing farmers to resort to chemicals that are more toxic--and not just to the sea lice but to other crustaceans like lobsters, crabs and shrimp. Cooke Aquaculture in New Brunswick admitted to La Presse they have lost over 500,000 farmed fish to heavy lice infestations resistant to standard treatment. DFO’s Director General of Aquaculture at the time told Living Oceans Society farmed salmon in the Bay of Fundy were registering lice loads of 200 to 300 lice per fish. A series of lobster die-offs in the Bay of Fundy led to an analysis which discovered Cypermethrin, a banned-in-Canada chemical lice treatment, in the dead animals. In late 2010, Environment Canada raided the offices of Cooke Aquaculture, investigating the possible use of illegal chemicals to treat the growing lice infestations. In November, 2011, Environment Canada charged Cooke’s CEO and two managers of the company with 11 indictments each under Section 36 of the Fisheries Act – depositing deleterious substances into fish-bearing waters. The company eventually entered a plea to two indictments and was ordered to pay $500,000 in fines.

With DFO’s assistance, the east coast industry is now testing new paraciticides (AlphaMax™) containing highly toxic chemicals such as deltamethrin in an effort to control the lice infestations. Living Oceans and our partners in CAAR joined forces with the Atlantic Coalition for Aquaculture Reform and east coast fishermen’s associations in urging the withdrawal of DFO’s draft “Pest/Pathogen Treatment” regulations that entrenched the use of a wider variety of toxic parasiticides in open net-cage farms Canada’s oceans. Nevertheless, approval has now been given for the use of additional treatment chemicals.