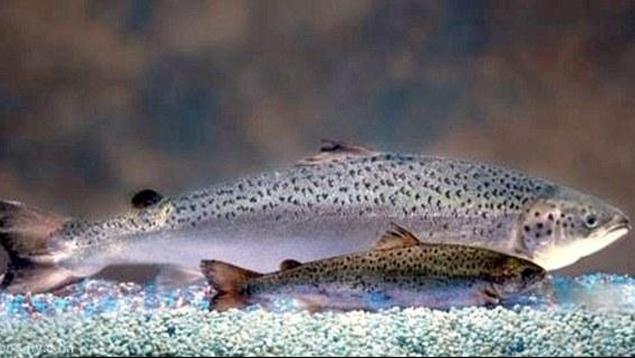 In industrial agri-business one way to increase profits is to reduce costs. Faster growth from altering an animal’s genetic material is one way to do that. But genetic engineering raises complex questions for ecosystems and consumers. Genetically modified (GM) salmon were patented by Canadian scientists who took a gene that regulates growth hormones in Pacific Chinook salmon and a promoter—the equivalent of a genetic 'on-off' switch—from an ocean pout and introduced them into the genetic structure of an Atlantic salmon. This modification gave the Atlantic salmon a year-round appetite enabling it to reach market size faster than other farmed salmon.

A company called AquaBounty now plans to use these GM fish to produce salmon eggs at its research hatchery on Prince Edward Island, Canada. The company wants to ship the commercially produced eggs to Panama, where the fish will be grown in a land-based facility and, if approved by the U.S. Food and Drug Administration (FDA), sold as table-ready GM salmon in the U.S. marketplace.

Genetic modification (also called genetic engineering or rDNA technology) is a controversial technology that allows for the transfer of genetic material directly from one organism to another (across the species and kingdom barriers) at the molecular level, and is dramatically different from animal breeding, posing new risks and unpredictable impacts on the organism and ecosystems.

There is a lack of independent science on these GM salmon, including long term trials studying the potential health risks. Neither the U.S. or Canadian governments have done any safety testing and rely solely on studies done by the company. There are concerns that the sample sizes used to assess the AquaBounty fish are inadequate to determine human health and safety risks. The FDA is currently examining the GM salmon through its process for reviewing new animal drugs because, as yet, there is no approved process for reviewing the safety of GM animals. The sale of GE fish to American shoppers is being hotly contested in the U.S. through a variety of senate, congressional and state bills currently under debate.