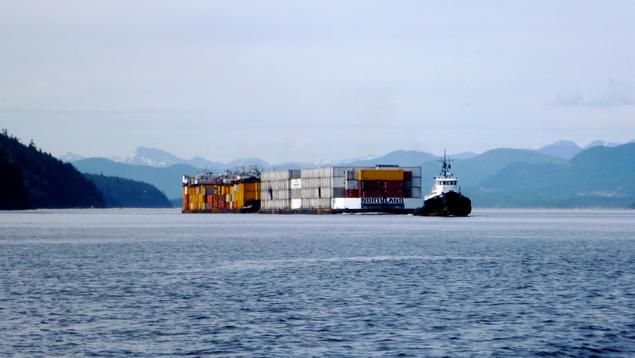 Canada’s Pacific North Coast has some of the most treacherous waters in the world, with deep fjords, narrow passages and strong tidal currents. Countless reefs and rocks are scattered along the coast, many of them uncharted. In summertime fog blankets the coast and violent storms rage all winter long.

Despite the hazardous conditions, large vessels ply these waters year round. Ferries, cruise ships, container ships, and freighters all frequent this area, and their numbers are increasing. Over the next 15 years, the number of containers shipped through our coastal waters is expected to triple. Several proposed projects threaten to bring supertankers to the North Coast for the first time.

We’ve been lucky so far that there have been so few major marine accidents, but more traffic will raise the risk of disaster. Our coast has not been free of incidents, however. The sinking of BC Ferries’ Queen of the North in Wright Sound and the barge that dumped its load of logging equipment into Robson Bight Ecological Reserve both resulted in oil spills.

Imagine what would happen in the event of a major shipping disaster on Canada’s Pacific North Coast. Government and industry may not be prepared to respond to pollution of this magnitude (Marine Vessel Causility Risk and Response Preparedness report). An audit (PDF copy) of the Canadian Coast Guard revealed that they are ill equipped to deal with oil spills; thousands of smaller spills happen each year whether from pleasure boats or small fishing vesselss although they are assigned a key role in responding to those emergencies. Moreover, a recent report prepared for the Living Oceans Society (Who pays for oil spills in Canadian waters?) shows that Canadian taxpayers could be on the hook for a large portion of the cleanup and compensation costs of such spills.

Check out our interactive map: Oil and Water. Navigate the Facts to learn more about ecological impacts we can expect if we have an oil spill on our coast.

Shipping disasters aside, large vessels cause many other types of pollution. Chronic oil pollution – oil that leaks out in bilge water or is deliberately dumped into the water in small amounts – can be just as toxic to marine life as a large oil spill. Seabirds are particularly vulnerable as it only takes one drop of oil to ruin the water repellent coating on their feathers. Sewage and garbage also cause significant harm (Cleaning up our Oceans report). Birds and other marine creatures get entangled in plastic debris or think they’re food and swallow them.

Large vessels are particularly bad for marine mammals. Killer whales, for instance, rely on sounds they produce underwater to locate and capture salmon. Shipping traffic causes a high level of noise pollution, which can interfere with whales’ ability to hunt. Increased traffic will cause more interference and also increase the risk of ship strikes of all whales, especially humpbacks and fins.

The waters of the Canada’s Pacific North Coast will become busier over the next few decades. It is unavoidable. We can keep our waters free of pollution by laying out stringent rules to manage marine transportation.