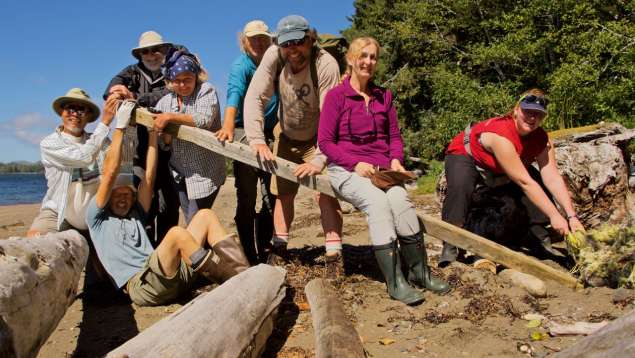 Clear the Coast 2018 engaged both new and returning volunteers to collect, bag, transport and recycle/landfill five tonnes of plastic marine debris from Vancouver Island’s northern shores. Throughout the year, staff and contractors worked to raise public awareness of the myriad sources of marine debris, targeting single-use plastics in particular. Our outreach included school and community organization presentations, social media and co-promotion of an online university project called “Straws for a Cause”. We worked with federal and provincial governments to establish a policy framework for plastic pollution and to urge action and funding for removal of so-called “legacy plastics” from our shores.

We succeeded in removing 5 tonnes of plastic material, working together with B.C. Marine Trails Network Association on the heli-lifting and ground transport of bagged material. We managed to clean all of the beaches south of Cape Scott that we have cleared for (now) five consecutive years and can report that substantially less debris had accumulated on the largest beaches (Lowry Bay, Sea Otter and San Josef).  This may mean that we are gaining ground against the incoming tide of plastics, by preventing them from being refloated; or it may simply be that last winter’s severe storms stranded the debris in different locations.  The Helen Islands, for example, at the mouth of Sea Otter Cove, contained four times more debris than in previous years.  We were constrained by the types of boats available to us from checking foreshores further afield to determine if there were other locations where large volumes had accumulated.

With increased media attention to the issue of marine plastics, many new volunteers came forward and some of them worked independently of Living Oceans to collect and prepare debris for our heli-lifts.  Yuki and his people Darren, Renee and Ryan tackled Hecht Beach on a particularly foul weekend.

Debris was sorted on the beaches and bagged for recycling or landfill. Almost all of it was landfilled this year as there is currently little if any market for recycled plastic. This is the result of a dramatic change in China’s policy regarding the quality of recycled plastic they will accept for reprocessing. The only other end-of-life options available to us were incineration or pyrolytic conversion, with little information about the pollution controls available for the use of marine debris as feedstock. With the added cost and carbon emissions profile associated with moving 5 bulky tonnes of material by truck and ferry to the plants capable of burning it, we did not find this a preferable solution to landfilling. The Regional District of Mount Waddington agrees and continues to accept the material without charge.

Encouraging all levels of government to work together under a policy framework that addresses source control, habitat restoration and reuse/recycling options for plastics

We worked directly with federal Members of Parliament on policy initiatives for plastic pollution control. Gord Johns, the local Member for Vancouver Island’s west coast, was an active champion of the cause, putting forward a private members’ bill and petition that we encouraged our supporters to sign. We provided briefing notes and discussed strategy with Joyce Murray, who worked with the Liberal Party’s policy team to put forward an initiative at their policy convention in the spring. Her work was so effective that the policy initiative was overtaken by a PMO decision to champion a Plastics Charter at the G7 Summit in Quebec in June. While only dealing with reduction of single-use plastics, we view the Charter as a hopeful start on tackling the problem. Unfortunately, Canada’s contributions to date appear to view the problem as one of developing-world origin, as the Government’s action plan contains neither action nor funding to deal with domestic plastic debris.

More recently, we’ve worked with Nathan Cullen on the draft text of a private members’ bill that would restrict the use of non-compostable, non-recyclable packaging.

We worked with environmental groups across the country to provide submissions to federal and provincial leaders that aim to harmonize and increase the effectiveness of plastic pollution efforts and were successful in convincing our colleagues that the plan would not honour Canada’s moral obligation to the international community unless it included provisions to deal with the legacy of plastic waste currently in the ocean and stranding on shorelines everywhere.

We continue to work with the Province of B.C. on both the issue of funding for marine debris removal and on their upcoming amendments to the Extended Producer Responsibility regulations.