Predator interactions: What may look like a free lunch could end up being the last meal 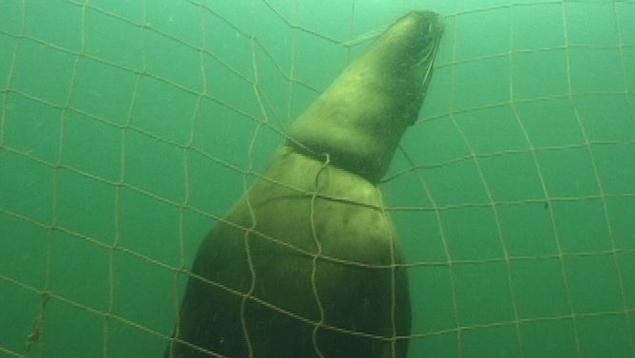 Salmon farms attract wild species both large and small which are looking to find a meal. But this attraction can be fatal for the predators that are drawn to the fish inside in open net-pen. Even though it is illegal in B.C. to shoot a marine mammal, salmon farmers are routinely permitted to shoot ‘nuisance’ harbour seals and California sea lions around their farms.

When it comes to killing B.C.’s seals and sea lions, it’s not surprising that Marine Harvest, the world’s largest salmon farming corporation and the owner of more than half of B.C. salmon farms, recorded the highest totals. At the corporation’s Mahatta West farm in Quatsino Sound, 46 California sea lions were shot between January and March of 2011 while 19 were killed at their Mahatta East net-pen site and 15 at the Cleagh Creek farm. Eleven harbour seals were shot at the Phillips Arm farm in the Discovery Islands, near the Wild Salmon Narrows.

Mainstream Canada (Cermaq) killed 47 California sea lions and the company was also responsible for the shooting deaths of two Steller sea lions at a farm site in the United Nations Biosphere Reserve in Clayoquot Sound. Stellers are listed as a species of ‘special concern’ under Canada’s Species at Risk Act (SARA) and the government has a special management plan in place to aid in the recovery of the species.

In the first three months of 2011, 141 California sea lions were deliberately shot by salmon farmers -- only the tip of the iceberg when it comes to recent revelations of  the environmental damage caused by the net-pen industry in B.C. Now that Fisheries and Oceans Canada (DFO) has responded to our demands for more transparent reporting on the  impacts of salmon farms, we are beginning to get a much clearer picture of the harm that open net-pens are inflicting on coastal ecosystems.

Beyond the numbers of shootings, birds, sea lions, seals and dolphins also drown when they get entangled in the farms’ nets. In 2007, 51 California sea lions were drowned at one farm in Tofino Inlet, bringing that one company’s toll of drowned sea lions to 110 in four months. That same year a harbour porpoise, a white sided dolphin and a Steller sea lion were all found entangled and drowned in the predator nets at another inactive farm that had no fish in pens.

Since 2011 salmon farmers are required to report lethal interactions with marine mammals as a condition of their licence. According to the DFO website, in two years of reporting, DFO has authorized salmon farmers to shoot at least 295 marine mammals and another 24 have been reported as accidentally drowned. Between 1990 and 2008, B.C. salmon farmers legally killed approximately 7,650 seals and sea lions including more than 370 Steller sea lions which are officially listed as a species of special concern under Canada’s Species at Risk Act.