Should you worry about Fukushima radiation on Canada’s Pacific coast?

There are many scary doomsday stories currently circulating about the long-term, large-scale consequences of the catastrophic events that occurred in Japan on March 11, 2011 that led to the destruction of the Fukushima Dai-ichi nuclear power plant and the subsequent release of radioisotopes. Because of all the scary stories, we have been fielding questions from people concerned about the consequences and confused about the overwhelming (and often contradictory) amount of information out there.

In an effort to answer your questions and to address our ongoing concerns about the potential ecological and health implications of the largest-ever accidental deposition of radiation into the Pacific Ocean (that is likely still ongoing) we went wading through the sea of information looking for some sound science from people who might actually know the score. Although there seems to be a shortage of good information and we certainly do not have all the answers, here are a few well supported and well researched facts that we found:

Radiation from Fukushima is detectable off British Columbia’s coast, but at levels 20,000 times below maximum permissible levels for drinking water. 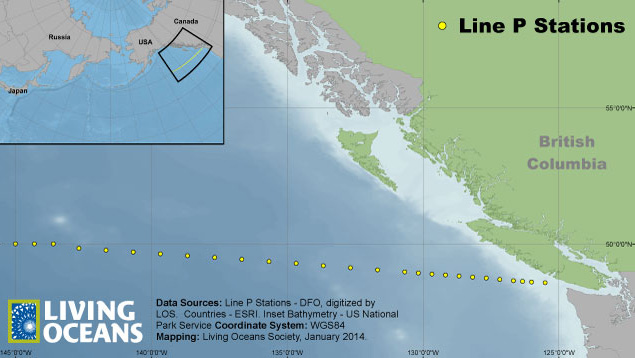 DFO’s Institute of Ocean Sciences (IOS) has been conducting oceanographic surveys three-times-per-year along a line of 26 stations running west from Vancouver Island out to 1,500 kilometers offshore. The stations collect and analyze seawater samples for traces of radioactive elements. During their last survey in June 2013, IOS detected radioisotopes from Fukushima (Cesium-137) at levels elevated above background levels at all of the stations along the line, but at  very low concentrations: between 0.9 to less than 0.5 Becquerels per cubic metre of seawater. This is well below maximum permissible concentrations in drinking water (set at 10,000 Becquerels per cubic metre).

It is still safe to eat seafood, although some fish have been found to have very low levels of radiation.

A few scientific studies have been conducted to assess the contamination levels of Pacific seafoods and the associated health risks. The Pacific bluefin tuna is a highly migratory species that migrates from Japan to the west coast of North America and so it serves as a good proxy for these types of studies. Scientists have found that Pacific bluefin tuna did have trace amounts of Fukushima-derived radiation when sampled off the coast of California, however the doses are well below what any of us are exposed to on a day-to-day basis.

Events at the disabled Fukushima Dai-ichi power plant are still unfolding and we know more radioactive water is still leaking into the Pacific albeit at much lower levels than right after the explosions. The situation demands continued monitoring and that the results be shared. For now, the very low levels at which Fukushima-related radiation is being detected in seawater samples off our coast lead us to believe that it is still safe to eat locally caught fish from the Pacific, as long as they are recognized as a good choice by SeaChoice. And it’s still safe to get out on the beaches, enjoy the ocean and also pitch in and help to Clear the Coast.