Earth Day, April 22nd, was a landmark day in sustainable aquaculture as Canada’s first-ever land-raised, closed-containment Atlantic salmon entered the marketplace. Sold under the brand name KUTERRA, the fish are raised in a facility that is fully owned by the ‘Namgis First Nation and located near Port McNeill, B.C. on the northern coast of Vancouver Island. 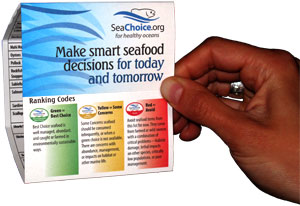 The ‘Namgis’ innovative land-based system in creased feeding efficiencies by 30 percent compared to conventional salmon farming practices. This means that fewer wild forage fish have to be caught to feed the farmed fish.

The ’Namgis launched the farm in March 2013 to prove the economies of growing Atlantic salmon sustainably, on land. Just over a year later, the farm’s first harvested salmon are for sale at Safeway stores in Alberta and B.C. under the KUTERRA brand name, which combines ’Namgis terms for ‘salmon’ and ‘land.’

Canada Safeway has been our SeaChoice partner since 2011 when we began working with the retailer to transition their seafood products to fully sustainable sources by the end of 2015.