On January 24 Canada Safeway took another leap in its role as a leader in sustainable seafood when it unveiled its new in-store consumer information program. Safeway shoppers in western Canada will now be able to easily identify which fresh and frozen seafood items are the best ocean-friendly choices. 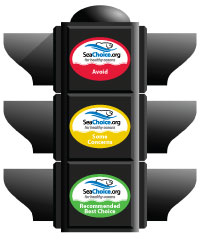 SeaChoice has trained Canada Safeway’s seafood staff to help them guide their customers through the growing number of sustainable seafood products that are available to shoppers. SeaChoice also provided the western Canadian retail giant with sourcing assistance, policy development and merchandising, and outreach support.

“Canada Safeway really is walking the talk when it comes to their sustainable seafood commitment,” stated Kelly Roebuck, Living Oceans’ SeaChoice representative. “SeaChoice applauds the amount of dedication, time and effort by Safeway to meet their 2015 timeline to remove red-ranked seafood.”

Demand for seafood has increased substantially over the last 50 years and today one billion people globally depend on seafood as a source of protein.

“Balancing the needs of our customers and the needs of our planet is a challenge that the grocery industry faces on a daily basis,” said Bill Sexsmith of Canada Safeway. “By working with SeaChoice and our various suppliers, we strive to provide high-quality seafood that is not only a ‘best choice’ for our customers but also for our planet’s oceans.” 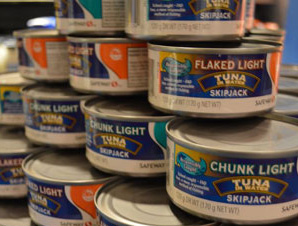 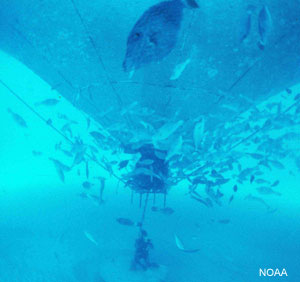 Canada Safeway has also launched its new “responsibly caught”skipjack canned tuna. The product is the first private-label brand in North America to make a commitment to using only tuna caught by free-school purse-seine methods rather than using harmful fish-aggregating-devices (“FADs”). A FAD is a man-made object used to attract fish such as tuna. It is usually made of buoys or floats tethered to the ocean floor with concrete blocks. Over 300 species of fish are known to gather around FADs.

The problem with FADs is bycatch; species with little or no commercial value such as sea turtles, sharks, rays and juvenile tuna, are injured or killed in the process of catching tuna.

FAD-free fishermen use radar, sonar and eyesight to locate tuna. Once a school of tuna is spotted, two boats lower a net called a purse seine is lowered into the water around the fish and then closed at the bottom. Safeway discontinued its private label yellowfin canned tuna because overfishing and  FAD concerns. Approximately 70 percent of canned tuna is caught using FADs.