Pathogens and Disease: Open net-pens allow a free exchange of pathogens between farmed and wild species 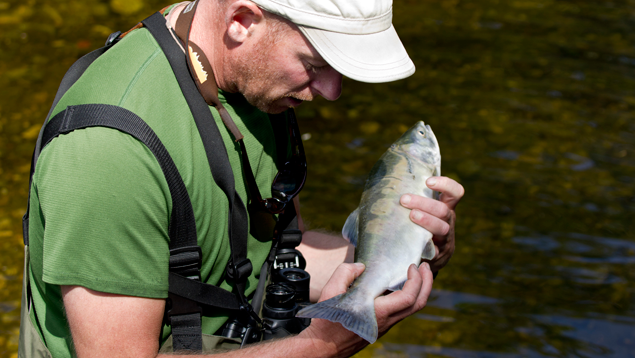 Pathogens - whether viruses or bacteria – are micro-organisms that can cause disease outbreaks in animals and plants. All organisms cope with pathogens in their natural environment. The ocean also has its share of ‘bugs’ that affect animals in the marine environment. Open net-pen salmon farms hold large numbers of fish at high density over long periods of time upsetting the natural balance and creating the right conditions for pathogens to amplify, mutate and spread to wild species that may be in the vicinity. Farmers closely monitor the health their stocks and have strict bio-security protocols in an effort to protect their own animals from pathogens and disease outbreaks. But who is monitoring the health of the wild fish outside the pens?

As it turns out, little was being done to investigate the health of wild salmon, except in response to massive die-offs. At the hearings held in 2011 for the Cohen Commission into the Decline of Fraser River Sockeye Salmon, government scientists at both the federal and provincial levels acknowledged that pathogens may be playing an important role in the declining population numbers of the sockeye, but initially maintained that there was no evidence that diseases endemic to Atlantic salmon had spread to Pacific stocks.

Just as the Cohen Commission hearings closed, a dramatic new development changed the picture painted by those government scientists. One particular virus, Infectious Salmon Anaemia (ISAv), which is lethal to farmed Atlantic salmon and has plagued the industry elsewhere in the world, was discovered by Simon Fraser University researchers in two Pacific sockeye salmon samples. The Commission re-opened oral hearings to consider this new evidence.

When the hearings resumed, yet more startling developments unfolded. Dr. Kristi Miller, head of DFO's Molecular Genetics Lab at the Pacific Biological Station testified that she had retested samples in her lab dating back to 1986 and found them to be positive for the same variant of ISAv as had been found in the recent sampling. Dr. Miller had also testified about finding a previously unknown parvo virus in samples of Fraser River sockeye salmon. The fish with this virus were thirteen times more likely to die in the river prior to spawniing than fish without it. When she released these ground-breaking findings in the peer-reviewed journal Science, Dr. Miller was prohibitied from doing media interviews. She was threatened with funding cuts and the loss of her lab's extensive collection of samples if she continued to work on fish health, she testified.

After the Cohen Commission hearings closed for a second time, another virus, Infectious Hematopoietic Necrosis - IHNv for short - took over the headlines. The science says it is an endemic pathogen native to Pacific Salmon - so common it is also known as sockeye disease. Atlantic salmon have no natural immunity to IHNv and past outbreaks in British Columbia farmed salmon have resulted in disastrous losses. Vaccines to protect farmed fish from some endemic pathogens are available; so the logical question was why so many farms went into quarrantine and subsequently killed their entire stocks. The answer: vaccines are expensive and farmers took a risk by not using them. The losses to the fish farming industry from this gamble were high enough, but the risk of harm to wild salmon from levels of this virus, amplified by the farmed fish to levels never seen in the wild, remain uncalculated.   DFO and the Canadian Food Inspection Agency now say that they are setting up wild salmon monitoring programmes to try to detect issues with pathogens in the wild. The draft plan intends to collect samples for ISAv testing from watersheds around B.C. Only one of these watersheds - Weaver Creek - is part of the Fraser River system, where sockeye populations have plummeted. The other three sampling sites are located along the Skeena watershed - far from the locations where ISAv positives were previously collected and far from salmon farms.

The Strategic Salmon Health Initiative is a partnership of DFO, the Pacific Salmon Foundation and Genome BC.  Genome BC is a leader in genomic research, decoding the DNA of fish and disease organisms alike, to understand how they interact and what mutations occur in the pathogens. The partnership was formed to lead definitive investigation of the impacts of salmon farms on wild salmon. It is led by Dr. Kristi Miller-Saunders, now freed of much of the communications restraint described above.  The SSHI was the first to establish a clear correlation between another common fish farm virus, piscene reovirus (PRV) and a disease called Heart and Skeletal Muscle Disease. The Initiative has published papers on this virus, most recently noting that it causes a fatal jaundice in Chinook salmon--essentially causing their red blood cells to explode en masse.  According to Marine Harvest's affidavits filed in court proceedings, 80 per cent of their hatcheries are infected with PRV and it would be virtually impossible for them to eliminate the pathogen from their broodstock.  The virus is carried inside the eggs of salmon and is thus impervious to surface disinfection.

Farmed fish suffering from Heart and Skeletal Muscle Disease often recover in the sheltered environment of the net-pen. Wild fish, however, suffer reduced swimming ability and most likely succumb to predators or starvation. Further research from SSHI is looking at a suite of pathogens and examining wild fish samples for DNA evidence of a state of disease.