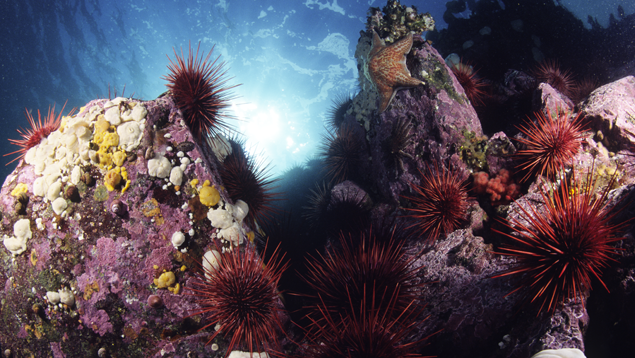 Rising ocean acidity reduces the availability of carbonate minerals which are used by thousands of marine species to form shells and skeletons. These “calcifying” organisms – such as corals, shellfish, and tiny marine snails known as pteropods – are important in marine ecosystems from the tropics to high latitudes and the deep sea.

When there is less carbonate available, it is increasingly difficult for these creatures to build their homes and sources of protection. Ocean acidification threatens species throughout the web who feed on these creatures – from salmon to whales.

By the time atmospheric CO2 doubles from the pre-industrial era (expected by 2050), tropical coral reefs may stop growing and start to dissolve. Some scientists predict that they will become extinct. Cold water coral ecosystems will be among the first to suffer with 70 percent experiencing corrosive water conditions by the end of the 21st century. Some may be affected as early as 2020.

Although it's challenging to predict, early worldwide fisheries losses are estimated to reach US $10 billion per year. Communities that rely heavily on fishing for food and income will be hardest hit.