Salmon farms out of control

Living Oceans has learned that something very odd is happening on and around open net-pen salmon farms on the British Columbia coast. A surprising number have sea lice levels that are completely out of control. Meanwhile, fishermen are reporting dead prawns and shrimp in their traps, or worse—there are no shrimp at all in areas they’ve fished for 30 years or more. We suspect there’s much more to the story. 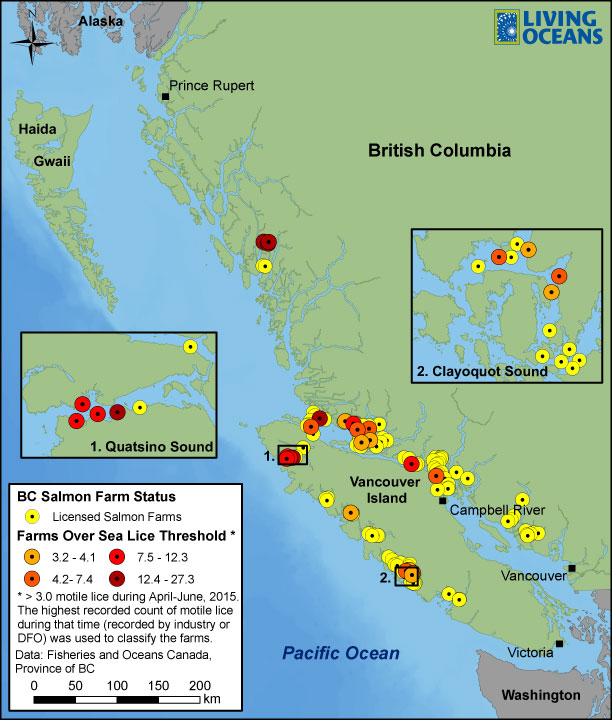 Salmon farms are supposed to treat their fish for sea lice when levels rise to an average of three lice per fish. During this year’s out-migration of juvenile wild salmon, some of the farms reported levels of over 20 lice per fish. According to the reports of the companies involved, treatments with both SLICE and hydrogen peroxide failed to control the infestation.

In Norway, home to the same companies that do business here, regulators are also responding to concerns about shrimp and prawn. The Norwegian Fisheries Ministry cites new evidence from the University of Bergen concerning the use of combination drug treatments to kill sea lice that have become resistant to the usual products, to the effect that this approach is more toxic to shrimp and prawns than any of the drugs used alone. The research also points to the use of unapproved “cocktails” of drugs. It appears that Norway is moving to restrict the use of these lice control methods to areas well removed from shellfish harvesting areas.

But back here on the West Coast, governments just approved a second open net-pen farm in Clio Channel, right in an active prawn and shrimp trawling area, over the objections of fishermen.

The salmon farming industry in British Columbia has been self-reporting a remarkable improvement in controlling the escape of farmed salmon: numbers have fallen from a high of 111,000 in 2008 to a mere three fish in 2015. For years, we’ve been trying to verify those numbers with data from DFO’s Atlantic Salmon Watch program. DFO records reports from anglers and commercial fishermen who find escaped Atlantics. But since 1996, the data have not been publicly available. So we were both delighted and appalled when our GIS Analyst Carrie Robb came across a Province of B.C. publication that apparently had access to the data. Carrie created this map showing where escaped Atlantics have been found. 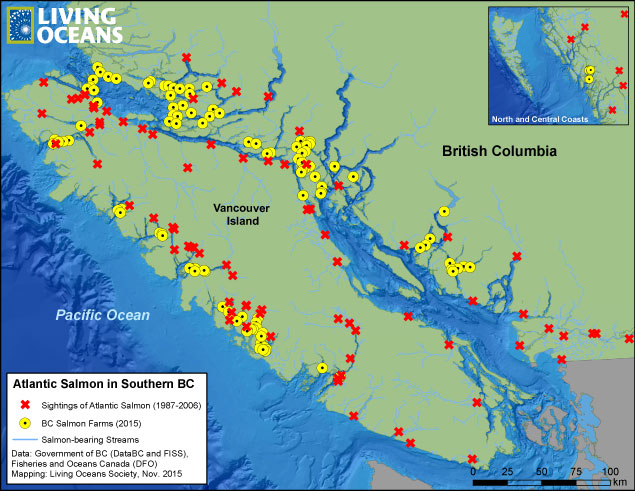 Note that the Atlantic Salmon Watch data set ends in 2006, whereas the farm locations shown on the map are current sites, so the correlation isn’t entirely clear; but it matters little, given how far afield those sightings are. Back in 1994-1996, DFO was also reporting over 100 Atlantics caught in Alaskan commercial fisheries.

The concerns with escapes are numerous: the potential to transmit diseases; predation, competition and colonization of rivers by the million-plus farmed Atlantic salmon that have escaped over the years. DFO shut down investigation as soon as the first indication of colonization appeared, in 1996-97.

DFO’s website assures us today that ‘extensive field work’ was conducted in 2011 and 2012 to ensure that no B.C. rivers were colonized. The work consisted of a single snorkel swim of each of six rivers in 2011 and the same six plus two more in 2012. The survey was done by staff who were being trained to identify Atlantics from among the tens to tens of thousands of other fish in the rivers. They didn’t find any Atlantics. The study’s authors do note, however, that it could be “difficult” to be sure they hadn’t missed one, when observing pools of thousands of very similar-looking wild salmon.

Living Oceans has tried working with industry to fix the problems caused by open net-pen salmon farms. We worked with them on the science and we tried to establish certification standards that we could all agree upon. Industry abandoned and now regularly denies the science; they refused meaningful certification standards. Now, we find they’re cutting corners on the audits for farm certification. For example, Marine Harvest’s Marsh Bay farm achieved Aquaculture Stewardship certification in January 2015. Our review of the audit disclosed abundant non-compliance with the standards. Before the end of February, it reported accidental drownings of four sea lions, surpassing its two-year quota for lethal wildlife interactions. Our appeal of the certification had to be made to the same person who performed the audit—hardly a process to inspire confidence. We’ve kicked our appeal up to Accreditation Services International, the body that oversees auditors, to see if they are prepared to stand up for rigorous and transparent auditing processes.

Meanwhile, Marine Harvest markets its Marsh Bay product as sustainably farmed salmon, even while dealing with an uncontrolled infestation of sea lice (the farm was reporting 23.77 adult female lice per fish in April 2015, nearly eight times the treatment threshold). 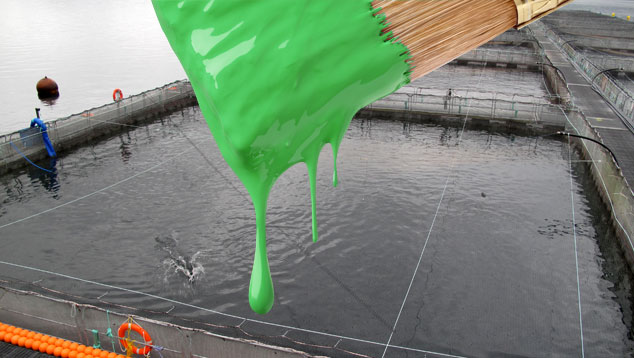 It’s no secret that open net-pen salmon farms are harmful to wild salmon, or that Living Oceans has been intent on getting them into closed containment since our inception in 1998. But now we find ourselves in need of your support so we can hire a salmon farming campaigner to maintain this important work. Over the years we’ve advocated for wild salmon with the provincial and federal governments, engaged directly with salmon farmers to work out a system where farms would lie fallow during out-migrations, worked to improve the scientific understanding of the diseases and parasites that are bred in the farms, partnered on pilot closed containment projects, and provided key testimony at the Cohen Commission inquiry into the ‘missing’ Fraser River sockeye.

We were optimistic that Justice Cohen’s recommendations would be a turning point in our campaign against salmon farms, but the Harper government ignored them entirely. Meanwhile, this year’s Fraser River early summer sockeye returns were less than half of the predicted 837,000. Even without any fishery at all, spawning estimates for most stocks are about half of what were expected.

Will you please help us continue our work to protect wild salmon?

We believe we now have an opportunity to work with the new federal government to finally get some of Justice Cohen’s recommendations implemented. It’s in the list of Liberal campaign promises. Now is the time when we need to push the agenda hard, to ensure that the Liberal government follows through on its commitment.

We need someone on this file full time, monitoring what’s happening on the farms, responding to new licence applications as they come up, talking to the B.C. government about its policies for approval of new farm tenures and, most especially, helping the new Fisheries Minister Hunter Tootoo understand the complexity of the file—and the department—he’s taken on. We’re still dealing with the same staff who for the past five years have failed to implement Justice Cohen’s recommendations.

Please consider making a donation because, with your help, we can keep up the battle to protect wild salmon, healthy oceans and healthy communities.