Our campaigners travelled thousands of miles to attend countless hours of meetings over the past decade, but it was worth it. On April 27th in Victoria, the British Columbia government and its 18 partner First Nations unveiled plans for the future of Canada's Pacific Ocean with the Marine Planning Partnership (MaPP) plans.

“MaPP plans are a step in the right direction to protect the ocean off B.C’s North and Central Coast that so many coastal communities depend on for their livelihoods,” said Karen Wristen, Living Oceans Executive Director. “These globally significant ocean ecosystems that are so rich with life are threatened by industrial development and climate change.” 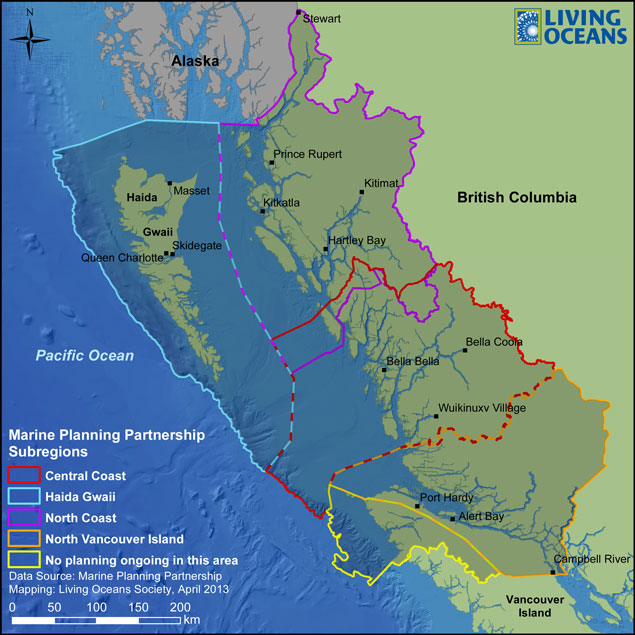 Through the long road to MaPP, Living Oceans represented the conservation sector at three of the advisory tables in an inclusive planning process that depended upon input from environmental groups, ocean-based businesses and regional district governments.

The MaPP plans will inform decisions on where to place development opportunities and provide a framework for local job creation that will bring economic prosperity to the coast while protecting the environment. We worked hard to get an oil tanker ban included in the plans, but the federal government was not part of the process and shipping is their jurisdiction. An increase in tanker traffic on the coast would threaten commercial fisheries and the recreation and tourism industries that are worth billions of dollars to British Columbia’s coastal economy.

The plans are science-based and were guided by traditional and local knowledge that will preserve long standing ways of life.

“The First Nations-Provincial partnership has done the heavy lifting with the development of these marine plans,” Wristen said. “Now it’s time for the federal government to join in with the implementation of a network of Marine Protected Areas that will help give effect to the plans and ensure that we maintain biodiversity and sustainable fisheries.”