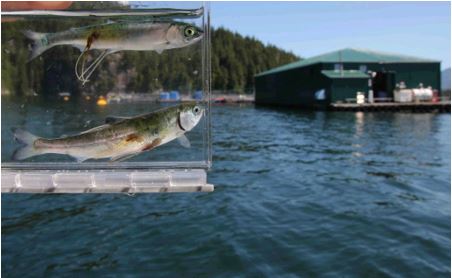 Despite ongoing occupations by First Nations insisting on their UNDRIP right to prevent salmon farming in their territories, salmon farms in the Broughton Archipelago whose leases expire in June of 2018 have been restocked with fish that will not be ready to harvest by the end of the lease period.

Although Agriculture Minister Lana Popham earlier advised salmon farmers that the future of their tenures was not certain, the Province has yet to take any formal public position on their fate. There are 26 licensed tenures in the Broughton Archipelago that local First Nations want to see removed.

Provincial action on the aquaculture file at present includes meetings with First Nations and industry in an attempt to resolve the Broughton impasse and a review of diagnostic practices at the Animal Health Laboratory that is contracted to do pathology for the federal Fish Health Audit programme. A review of fish processing plants has just been announced, in the wake of evidence that two plants are discharging bloodwater that has not been treated and is contaminated with PRV and enterococcus bacterium.

Federally, a new review has been assigned to Canada’s Chief Science Advisor, who has been asked to look into DFO’s aquaculture science and regulation. Terms of reference for the review have yet to be published, but we have some hope that it will be a robust inquiry into the science gaps that plague the regulation of the industry.

“This makes 4 provincial reviews, a federal judicial inquiry and now a second, focused review at the federal level in the 25 years since I first took on this file,” said Karen Wristen. “There will always be knowledge gaps, but we know enough now to understand that wild salmon need action taken immediately to protect them from salmon farming effluents.”