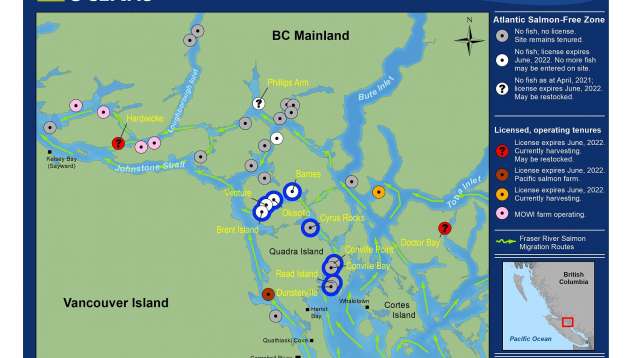 On December 17, 2021, Fisheries Minister Bernadette Jordan issued an order renewing salmon farm licences in the Discovery Islands just until June, 2022. That gives the industry almost enough time to get its farms decommissioned: gone for good.

Better yet, although the order allowed the farms to continue growing out fish that were already in the water, it prohibited the entry of any more fish in the region.  And most of the farms were already fallow, or would be by the time the spring, 2021 outmigration began in March.

Salmon farmers immediately resorted to the Courts, asking for a judicial review and injunction. Living Oceans and colleagues intervened, with the help of Ecojustice, to argue for wild salmon protection. In a stunning move, the Court rejected the applications of Discovery Islands First Nations to intervene, thereby excluding a vast amount of evidence.

A temporary injunction has been granted with respect to only 3 farms (Hardwicke, Doctor Bay and Phillips Arm) and that injunction says only this: that the Minister cannot issue a blanket denial of applications to transfer fish into these farms, but must decide about each on its merits. We wait to hear the Minister's decision on fish transfers, but in the meantime, rejoice at the prospect of the Wild Salmon Narrows being clear of lice and pathogens for the first time in over 20 years!