We've launched the 2012 Ocean Exposures Photo Contest just in time for summer and this year we're going big! With six categories and seven fabulous prizes, you'll want to get in the picture.You don't need to be a professional photographer to enter the contest. Just let the inner shutterbug in you fly free on your summer adventures and shoot some beautiful photos of the ocean that you love so much.

Ocean Exposures Photo Contest runs from June 21, 2012 until September 30, 2012. The winner will be announced on October 25, 2012. For inspriation, check out last year's Ocean Ecosystems entries on Flickr.

Keep It Clean: Mapping Support for a Tanker-Free Coast

Living Oceans is taking a stand against two tar sands proposals to bring super tankers to Canada's beautiful Pacific coast. We know that we aren't alone in our concerns about the Enbridge Northern Gateway Project and the Kinder Morgan Trans Mountain Port Expansion. 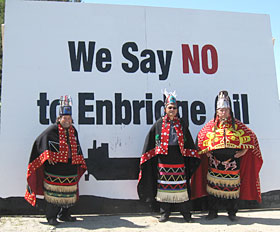 Here's your chance to share your opinion about super tankers on the coast and get artsy at the same time. Send us your photo conveying the message that you want to the keep the coast tanker-free.

Your photo will be placed in your community on Keep It Clean: Mapping Support for a Tanker-Free Coast interactive map on our web site. We'll use Keep It Clean as a visual petition to remind B.C. Premier Christy Clark that an overwhelming majority of B.C. residents don't want oil tankers on our coast. The photo can be as simple or complex as you like – just make sure that the message is clear: No Tankers!