VANCOUVER—A new study from Simon Fraser University concludes that the proposed Kinder Morgan pipeline expansion is not needed and far from being a benefit to Canada, would actually cost Canadians more than $6.4 billion.

The study estimates that investment in the Kinder Morgan pipeline will create excess pipeline capacity that will cost $3 billion, including costs to the taxpayer in the form of reduced royalties and taxes.

Kinder Morgan’s own analysis shows that construction of currently approved and proposed pipeline projects will create over 2.5 million barrels per day of empty pipeline space by 2020. That is equivalent to three Kinder Morgan pipelines worth of empty space.

The study estimates that the cost of unnecessary investment in pipeline projects could exceed $15 billion by 2020.

A smaller, but important part of the cost is represented by the subsidy the project would receive from BC Hydro. The study estimates that this subsidy would be $27 million per year, or a net cost for the project’s life of $257 million. The cost is based on the difference between the industrial rate at which BC Hydro would sell power to the project and the cost of replacing that power with new projects like the Site C dam.

“There is no trade off between the economy and environment in the case of Kinder Morgan’s expansion proposal,” said Karen Wristen, Executive Director of Living Oceans Society. “We can avoid all the environmental risks of Kinder Morgan and be better off economically by not building projects that are not required.”

The study cautions that unnecessary projects such as Kinder Morgan’s expansion may be financially feasible for the private company to build because they have secured long term contracts from shippers that were negotiated before the current downturn in oil markets.

The problem is that if they are built they will take oil away from existing pipelines that will then have empty space. Ultimately, the cost of this empty space will get pushed back to oil producers and to the Canadian taxpayer in the form of reduced royalties and taxes.

The study concludes that Canada needs to develop a comprehensive oil transportation strategy that comparatively evaluates all proposed projects to determine which project or mix of projects are best for Canada.

“There is an urgent need for a comprehensive federal energy policy that places the needs of Canadians at the forefront,” said Wristen. “These recent proposals are driven exclusively by corporate interests working in a policy void, so it comes as no surprise that Canada stands to gain nothing—even to lose money—by their completion.”

The study was commissioned by Living Oceans Society for the National Energy Board hearings on the TransMountain pipeline expansion.

The study reviews the economic case made by Kinder Morgan (Trans Mountain Pipeline ULC, or ‘TM’) for its Trans Mountain Expansion Project (TMEP) and concludes: 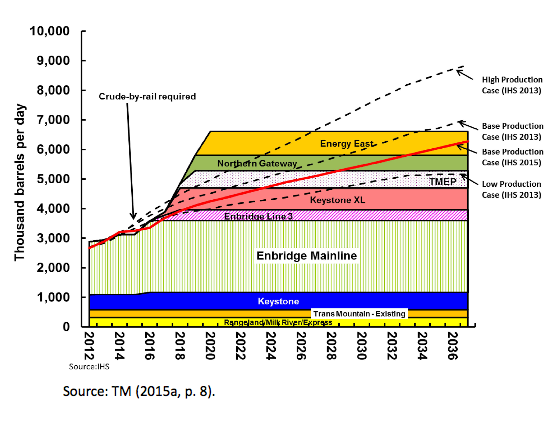