Already labelled by the media as the most secretive government Canada has ever seen, the current federal government achieved a new low water mark in disclosure this month when it was revealed that Health Canada has been approving the manufacture and export of genetically modified organisms without public notice.

Read on to find out about the world's first genetically modified food animal to go into production and the 80 other GM products for which Health Canada failed to publish notices required by law, that would have enabled us to comment on the applications.

I hope to meet many of you on Monday, March 31 at the Vancouver Public Library, as Riki Ott gives a presentation sponsored by Living Oceans. Riki has spent many years following the lives of people who suffered injury and personal losses following oil spills; her presentation this month will focus on the use of chemical dispersants.

Find details of the event here. 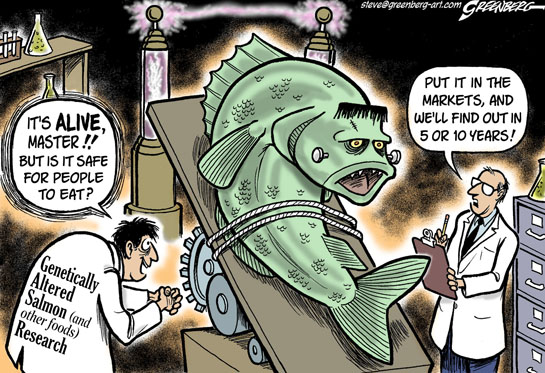 At the Enbridge Northern Gateway hearings, Living Oceans took a strong stand against the use of chemical dispersants in response to oil spills because they are toxic to certain marine life. However, both the Kinder Morgan TransMountain Pipeline application and the federal government’s recent Tanker Safety Report advocate their use. 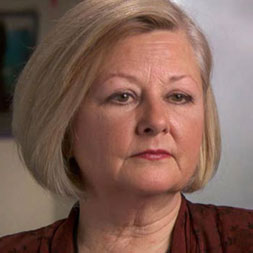 “This push to use dispersants is hard to explain,” said Karen Wristen, Executive Director of Living Oceans. “There’s a growing body of evidence that the dispersant/oil mix is more toxic than the oil itself.”

Toxic effects from oil dispersed into the deeper levels of the ocean have been observed in fish, shellfish and dolphins. Humans exposed to dispersants during spill response have also suffered illnesses ranging from skin and respiratory irritation through to serious central nervous system disorders.

The idea behind using chemicals to break up an oil spill on the surface of the water is the protection of shorelines, seabirds and marine mammals; however, this protection comes at the cost of the life or health of other creatures living in the water column or on the ocean floor. Studies following the Exxon Valdez spill have now established that the oil/dispersant mix becomes more bioavailable to some species and is adept at holding highly toxic, heavy PAHs (polycyclic aromatic hydrocarbons) in the water column. Salmon and herring are particularly vulnerable to these PAHs, which are linked with long-term genetic damage.

“Dispersants are used because they make the oil appear to ‘go away’, which is good for public relations and restoring public confidence in tourism and seafood,” said Wristen. “No more oiled birds and otter pups—people are far less sympathetic toward zooplankton and sturgeon, and it’s harder for the TV cameras to capture impacts below the water’s surface.”

Based on the science that exists today, it is difficult to foresee a situation where dispersants would create a better result than mechanical or natural processes. It is also unclear that dispersants could be applied effectively to spills of tarsands diluted bitmen: oil must be on the surface of the water and able to mix with the dispersant in order for it to do any good.

Living Oceans’ evidence at the Northern Gateway hearings directly critiqued Enbridge’s studies, finding that for much of the year, conditions would not be right for using dispersants in any event.

“So many factors have to line up for these chemicals to do their job,” said Wristen. “Wind, temperature, wave height and the time oil has spent on the water all play a role in determining whether or not dispersants can work. We found that over half the time, wind conditions alone would prevent dispersants from being used.” 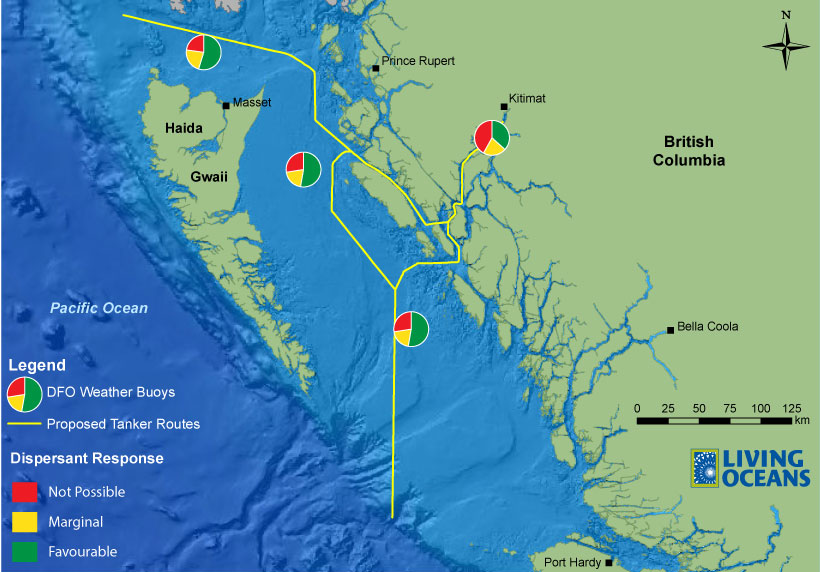 Riki's presentation of the feature documentary, Pretty Slick, will focus on the use of chemical 'dispersants' to break up an oil spill--and the environmental and human health toll these chemicals are taking. Riki appears in Vancouver at the end of an Alaska tour commemorating the Exxon Valdez disaster, 25 years ago.

A commercial salmon "fisherma'am", Dr. Riki Ott (PhD in marine toxicology) experienced firsthand the devastating effects of the Exxon Valdez oil spill—and chose to do something about it. She retired from fishing and founded three nonprofit organizations to deal with lingering harm. Pretty Slick documents harm to human health and sea life in the wake of the BP Deepwater Horizon well blow-out in 2010.  Dispersants were aerial sprayed on the oil slick--and on nearby residents, spill response workers and thousands of seabirds and mammals. Dispersants are intended to break up a slick into tiny droplets, in circumstances where a "net environmental benefit" can be achieved. This documentary questions the environmental benefit and leaves one to contemplate whether 'quick economic benefit' or 'net environmental benefit' is actually the driving force behind their use.

Under pressure to restore public confidence in tourism, seafood and the oil company's ability to operate without environmental damage, governments and polluters alike want to be seen to be "cleaning up." Using dispersants is good for public relations but not for the environment--or it seems, for the people who get near the operations.

Dispersants may be responsible for serious human health problems that were reported by spill response workers and exposed members of the public after both the Exxon Valdez and BP spill response. Several lawsuits are now underway as people seek compensation from BP for illnesses ranging from serious skin rashes to serious central nervous system impairment as a result of contact with the oil/chemical mix.

Riki will also give a short talk on the persistence and toxicity of Exxon Valdez oil. The herring fishery collapsed in Prince William Sound following the Exxon Valdez disaster where dispersants were used. Studies found that salmon and herring were particularly vulnerable to the cleanup chemicals.

Public Input on Marine Plans – Come out and improve these plans

Many, including myself have said “without a plan you are planning to fail” so the Conservation Sector has worked hard to plan with the Province, First Nations and sector representatives to come up with four draft marine plans for the ‘Great Bear Sea’ including Haida Gwaii, North Coast, Central Coast and the Northern Vancouver Island area. 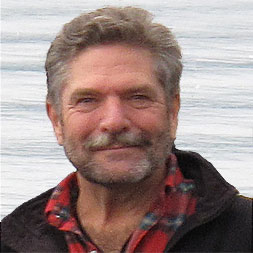 Drawing from best available science and the knowledge of technical experts, locals and First Nations, the draft marine plans recommend zoning and protection for different marine areas and propose strategies to address a wide range of issues. We all need to use marine resources sustainably and protect the ocean environment so it can continue to provide its many ecosystem benefits such as oxygen generation, carbon fixing, weather stability, healthy food webs, recreation and many other resources that are vital for the well-being and livelihoods for many people on the coast.

Many sectors have worked on this plan and now it needs public input. Open houses are being set up for you to review the plans, ask questions and provide your input. In North Vancouver Island, open houses are planned for:

Keep an eye on the Marine Planning Partnership (MaPP) website for information on dates, venues and other open houses being organized in the next few weeks.